How to Show Opposite Language in Language Switcher

Showing the opposite language in your language switcher comes in really handy in bilingual websites. You want to set it up so that you see the other language name or flag in the menu, not the current language.

There are two ways to achieve this, which we’ll detail below:

1. In your Menu Language Switcher

Let’s say you want to show just the opposite flag(s) in your menu. 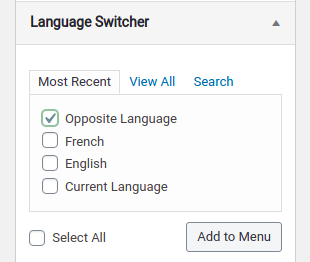 Note:This option only works when there are exactly two languages, the default one and a translation one.

Note: This option only works when there are exactly two languages, the default one and a translation one.