With both theme and plugin versions, Divi is one of the most popular and flexible ways to build a WordPress site. But while Divi gives you a ton of design flexibility, there’s no built-in way to translate Divi sites, which is why you’re probably here reading this post.

In this tutorial, you’ll learn how to translate a Divi site using the free version of the TranslatePress plugin.

By the end of this post, you’ll be able to use a visual interface to translate all of your Divi content, including images, forms, buttons, and more, by simply pointing and clicking on a live preview of your site:

Ready to learn how to translate any Divi website? Let’s dig in…

*This method will work for both the theme and plugin version of Divi.

How to Translate Divi Sites With TranslatePress: Step-by-Step

Here’s a bird’s eye view of the process of creating a multilingual site with Divi:

Divi comes in both a theme and a Divi Page Builder plugin version. Either way, you’ll be able to use a visual, drag-and-drop interface to design your content. Or, you can also use an abstract backend interface if you prefer that approach.

For this tutorial, we’ll choose one of Divi’s many premade layouts as it will provide lots of example content for us to translate. You can also build your content from scratch, though – it’s totally up to you: 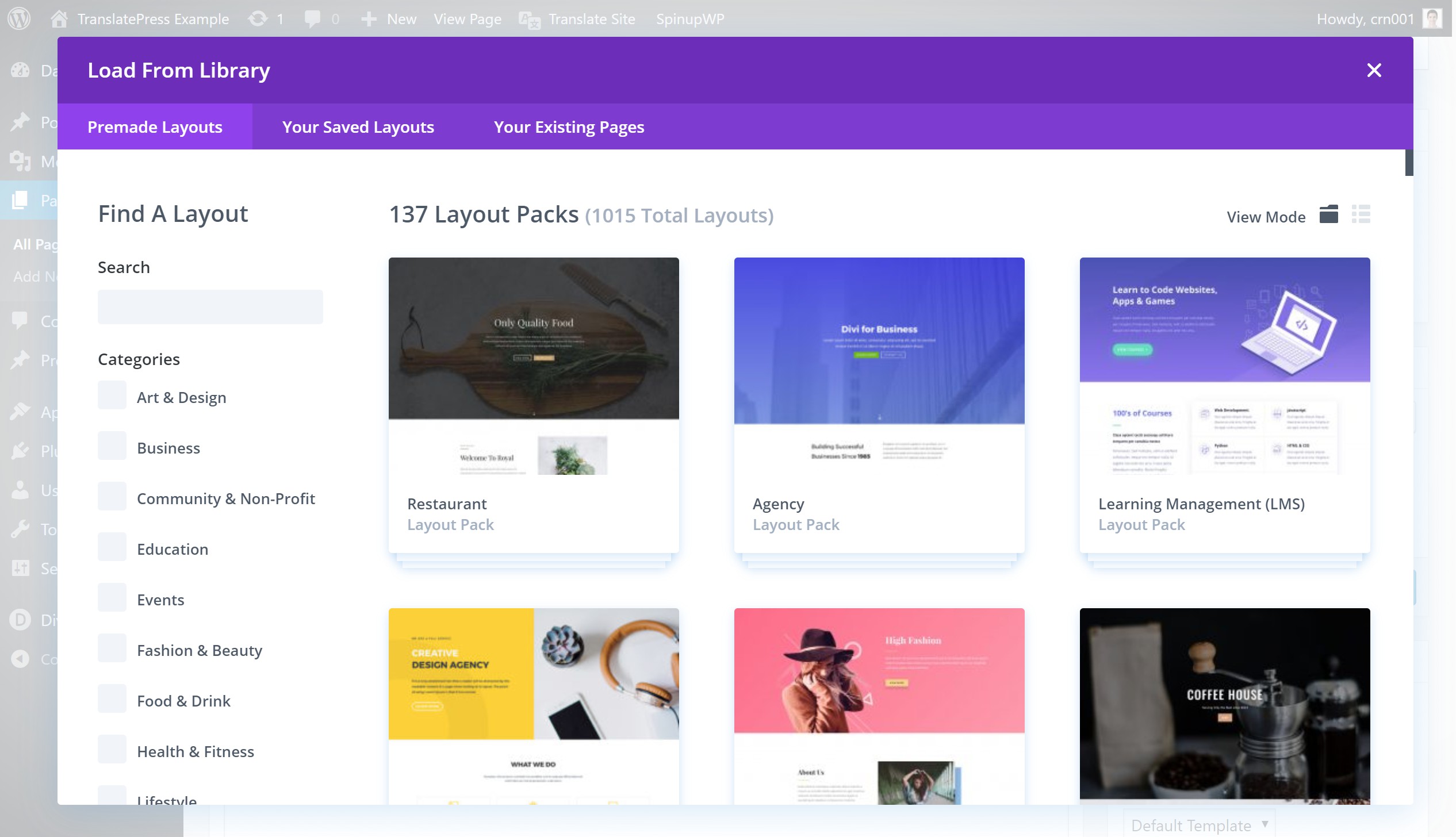 Divi comes with over a thousand pre-built templates, along with 137 dedicated “Layout Packs”, which are basically a themed set of templates for a specific website niche.

After importing the homepage template from one of the restaurant website layout packs, here’s what our Divi site looks like: 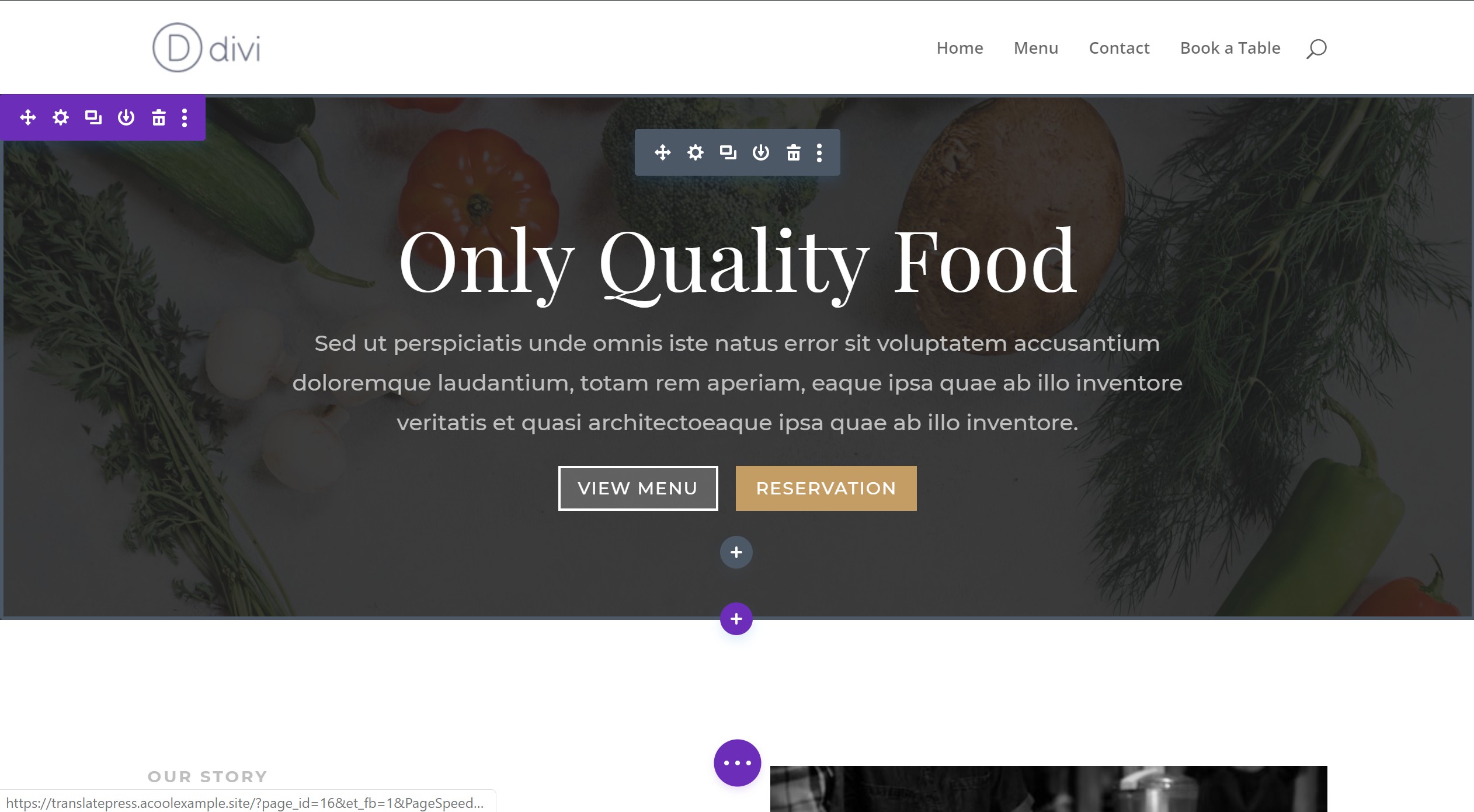 Feel free to customize any of the content and rearrange it as needed using Divi’s drag-and-drop interface – no matter what elements you add with Divi, you’ll be able to translate everything with TranslatePress in the next steps.

You can edit any of the text, change styling, add forms, sliders, etc. Knock yourself out!

Once you’re finished with your Divi content, you’re ready to translate it with TranslatePress.

Before you do that, though, you need to perform a few basic housekeeping steps, like choosing which languages you want to offer your Divi content in.

To get started, install and activate the free TranslatePress plugin. Once you’ve activated the plugin, go to Settings → TranslatePress to configure the basic settings.

Your first choice is which languages to use on your site. Use the Default Language drop-down to choose the language that your site currently exists in (e.g. English). Then, use the All Languages section to add as many new languages as needed.

The free version of TranslatePress lets you add one additional language, but you can upgrade to the paid version to translate your Divi content into unlimited new languages: 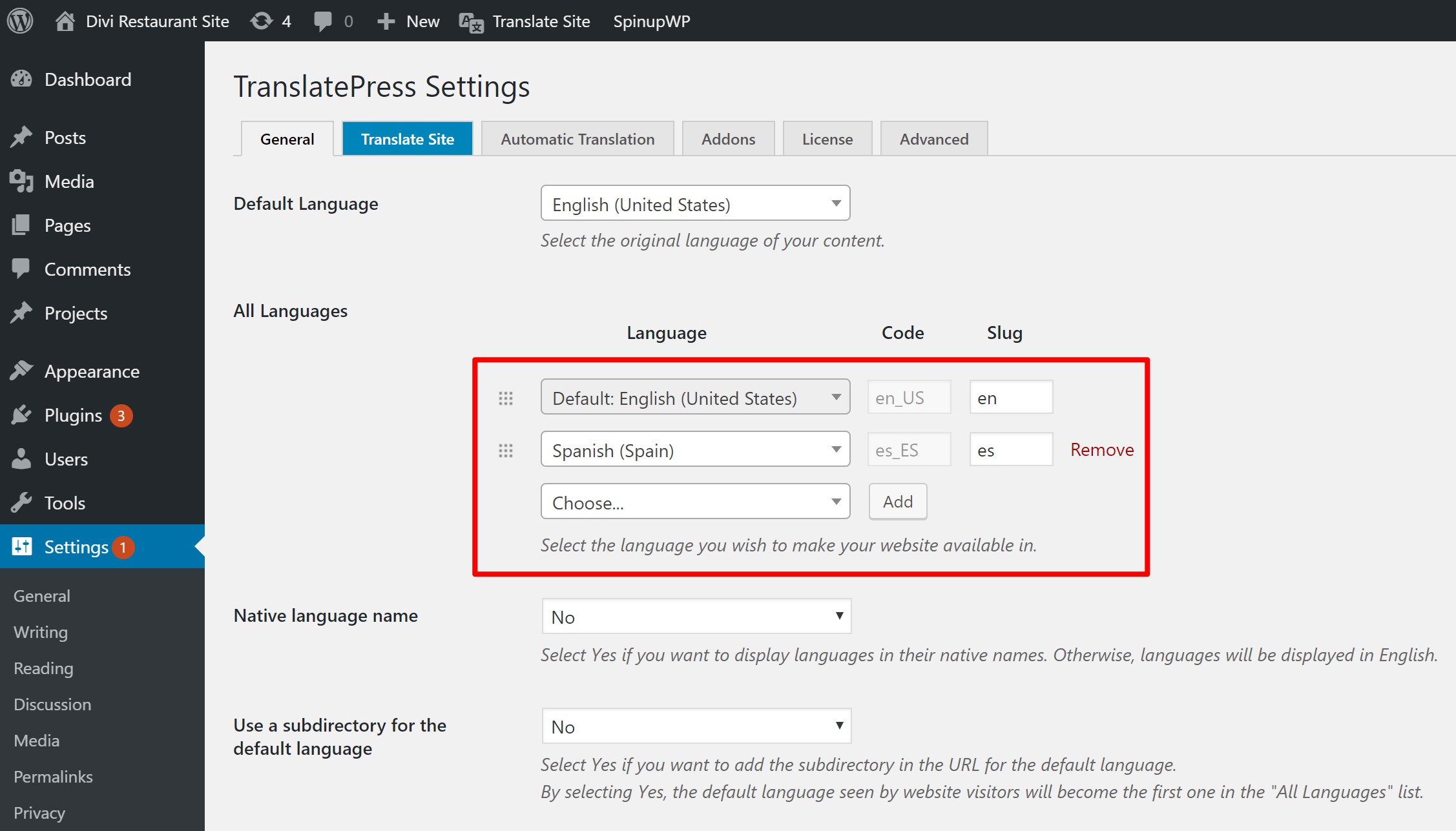 Another important choice here is whether or not to use machine translation, which you can configure from the Automatic Translation tab.

If you want to save some time, you can use the Google Translate API to automatically translate 100% of your site’s content, including all your Divi content. Then, you can go back and manually refine your translations where it’s needed:

Feel free to check out the other settings, as you might find something relevant to your Divi site. Then, once you save your changes, you’re ready to jump into translating Divi content.

To access this editor, open the Divi page that you want to translate on the front-end of your site. Then, click the Translate Page button on the WordPress toolbar: 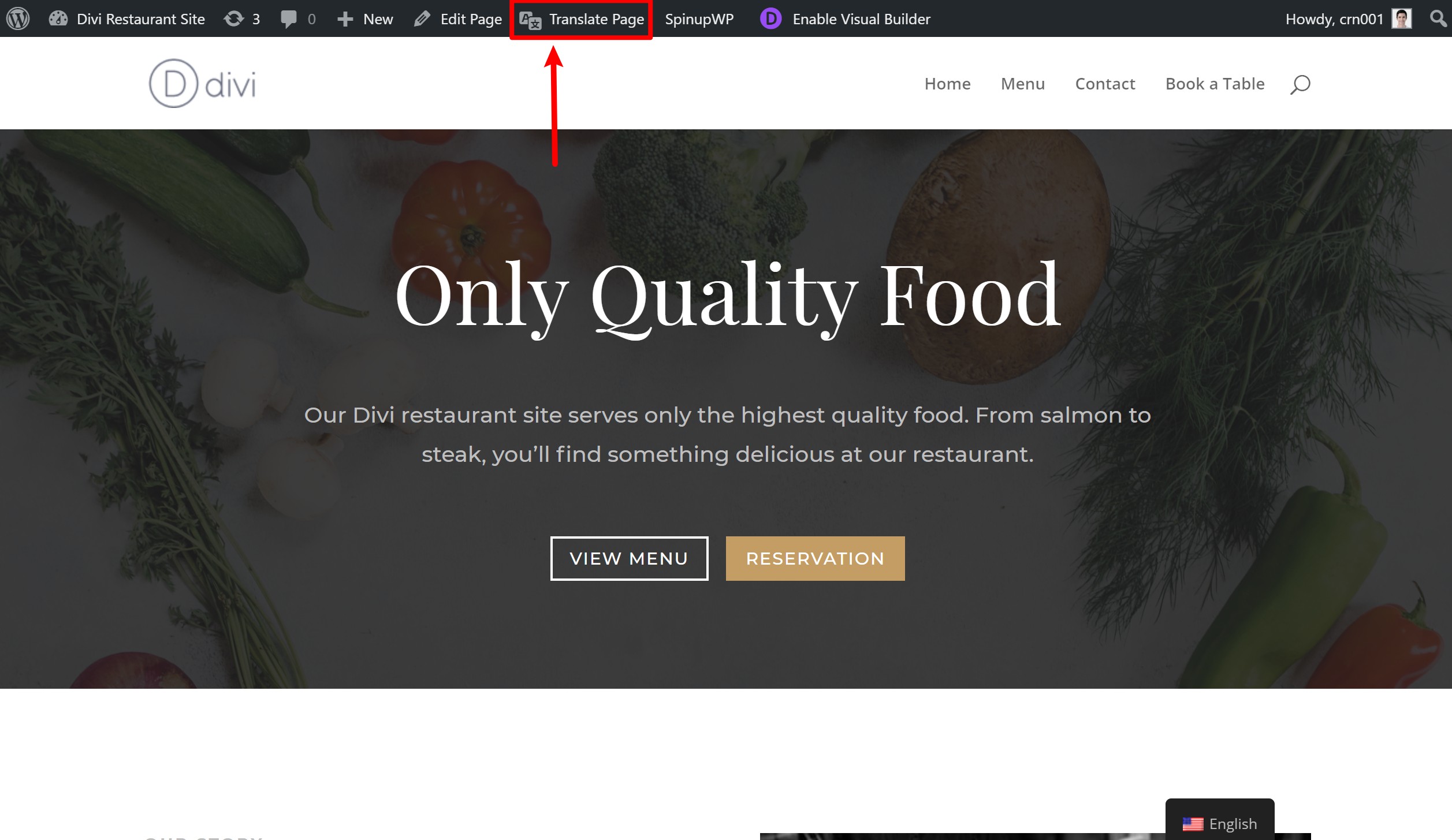 This will open the visual translation editor, which lets you translate 100% of your site’s content.

To translate a specific piece of content, all you do is hover over it and click the blue or green pencil icon. That will open translation for that piece of content in the sidebar, where you can make your edits: 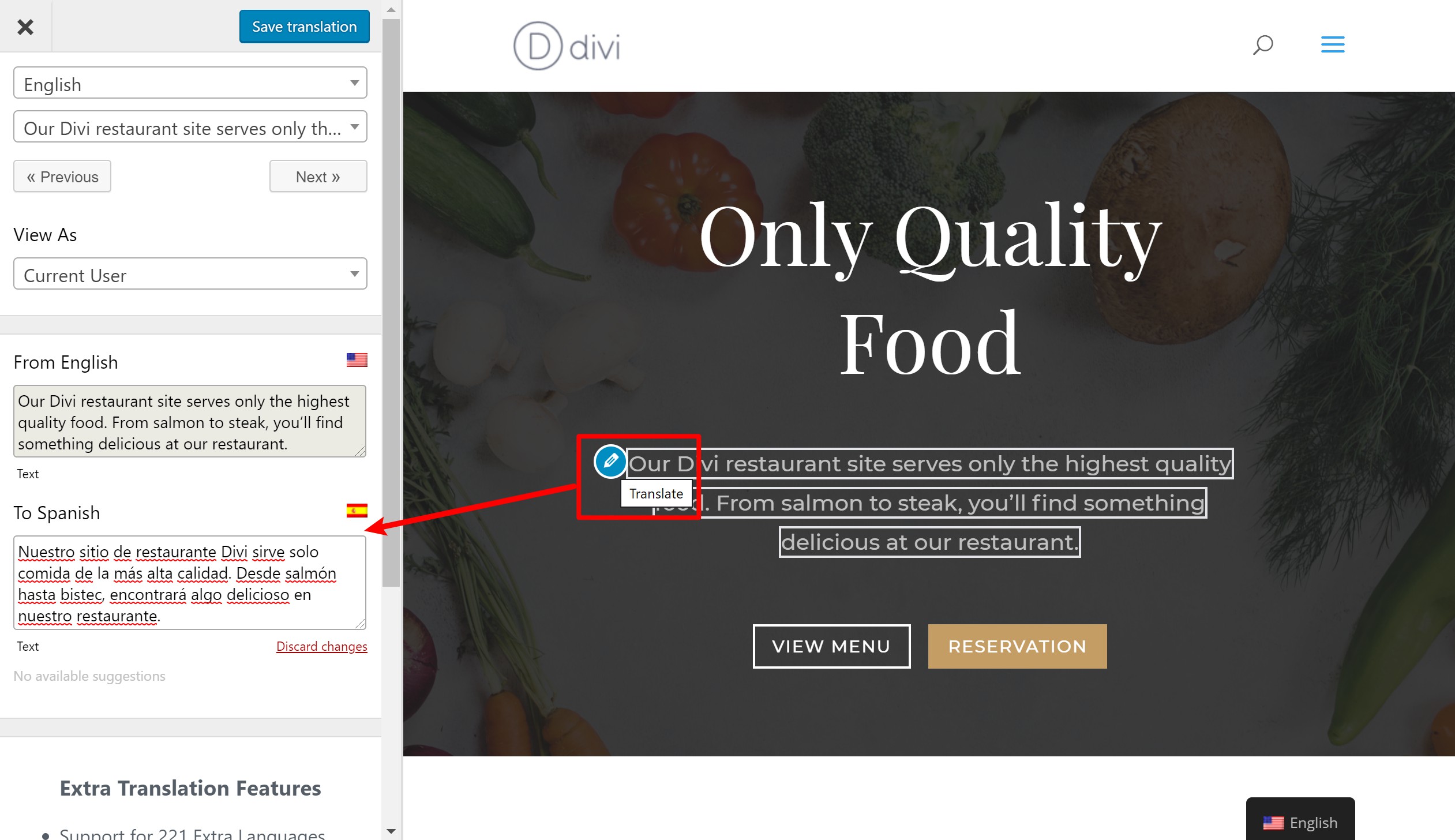 As soon as you save your translation, the translated text will appear in the real-time editor when you view that language, which lets you make sure the layout of your site still looks great: 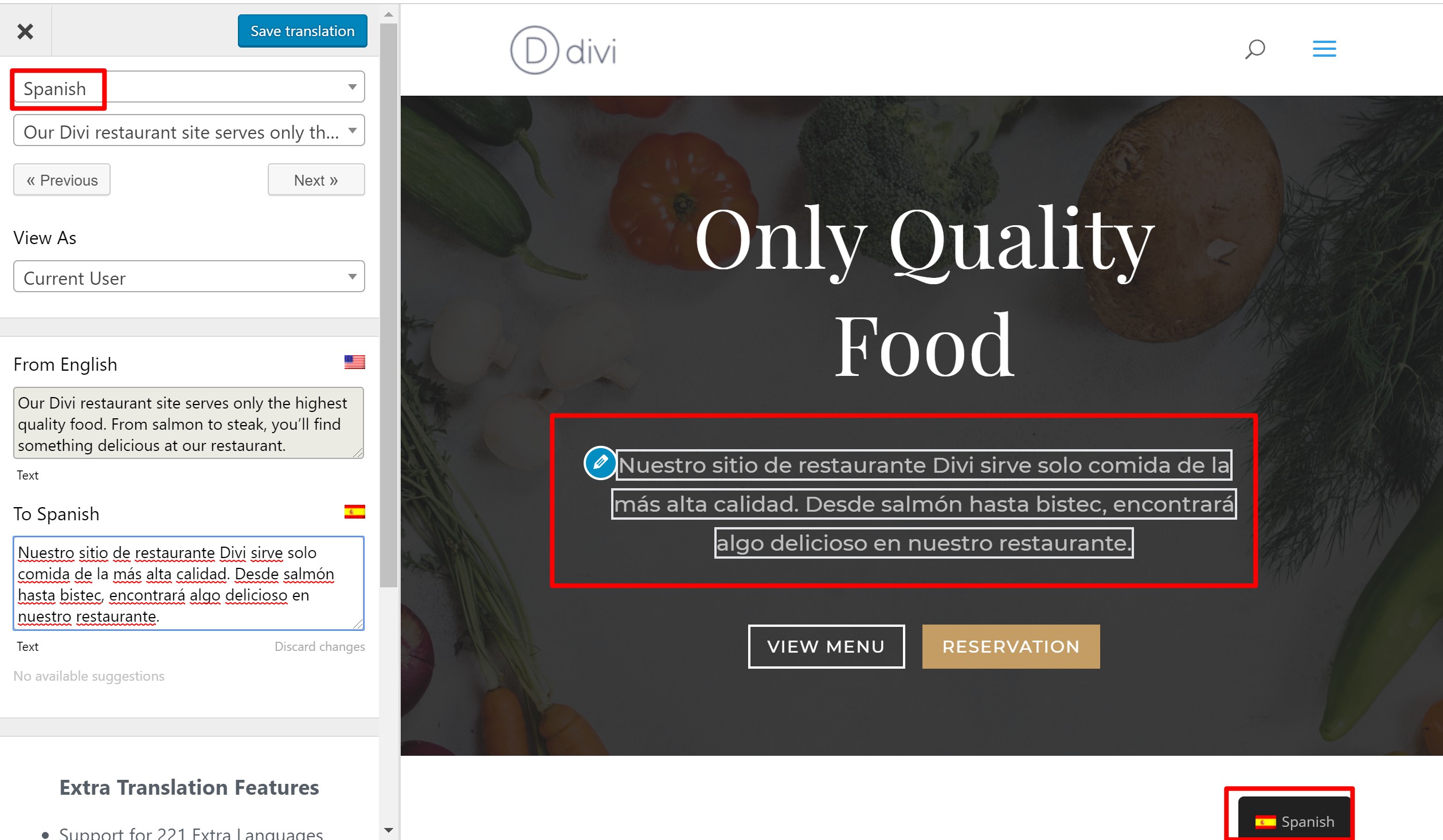 To quickly move between different translations, you can use TranslatePress’ keyboard shortcuts.

The powerful thing about this approach is that you can use it for all of your site’s content, including images, button links, menu items, popups…everything!

Let’s run through some examples…

As you saw above, our Divi site contains two buttons/links:

To translate a button, you just hover over it and click the blue pencil icon.

What’s different, though, is that you can translate both the button text and the button link. For our restaurant example, this means that you can send Spanish speaking visitors straight to the Spanish language version of OpenTable: 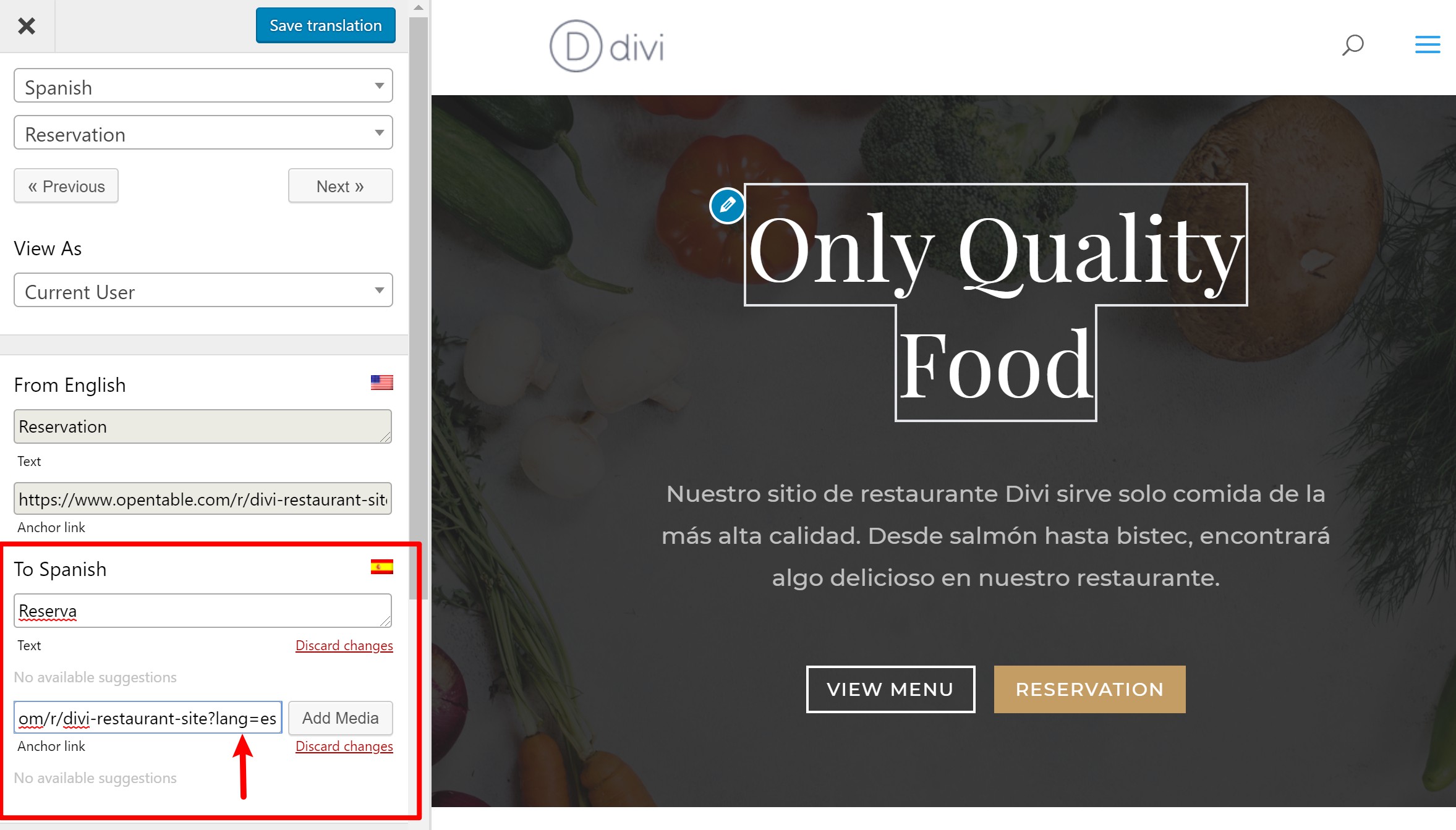 TranslatePress doesn’t just work for content inside the Divi Builder – it also lets you translate content from the Divi theme (or any other WordPress theme). This includes your navigation menus and any widgets that you’re using in your sidebar or footer. It also detects and lets you edit/translate gettext strings added by Divi theme or page builder plugin.

Once you translate the text once, TranslatePress will automatically use that translation across your entire site: 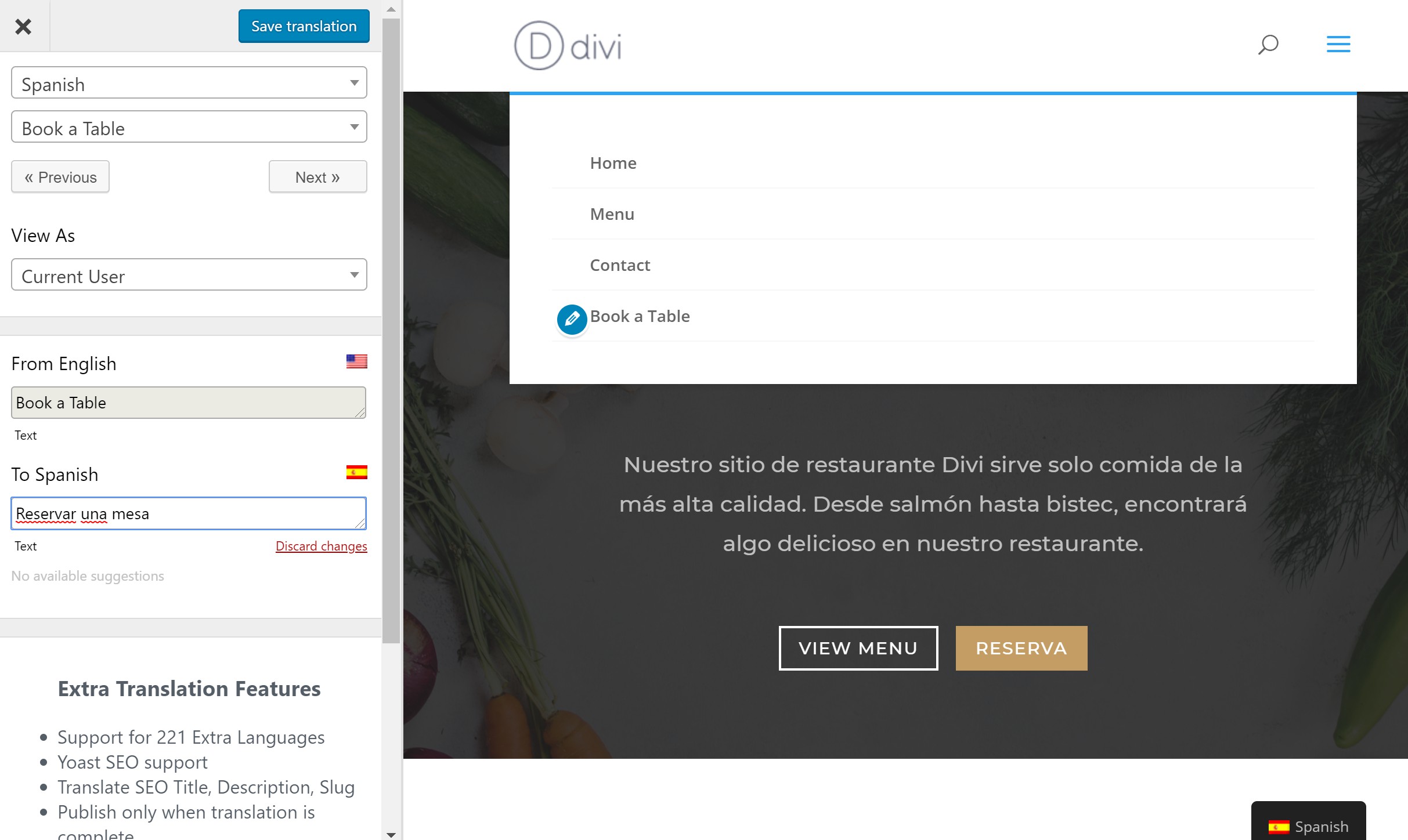 In addition to text content, TranslatePress also lets you “translate” images. That is, you can use different images depending on which language a visitor is browsing in.

For example, you can use a different logo for different languages. Or, you can translate an image that’s used in your content for better localization.

To translate an image, you can use the same approach – hover over it and click the blue pencil icon. Then, you can use the sidebar to choose a new image from your WordPress Media Library or enter the URL to an external image.

Here’s what it looks like to translate the logo in the Divi theme: 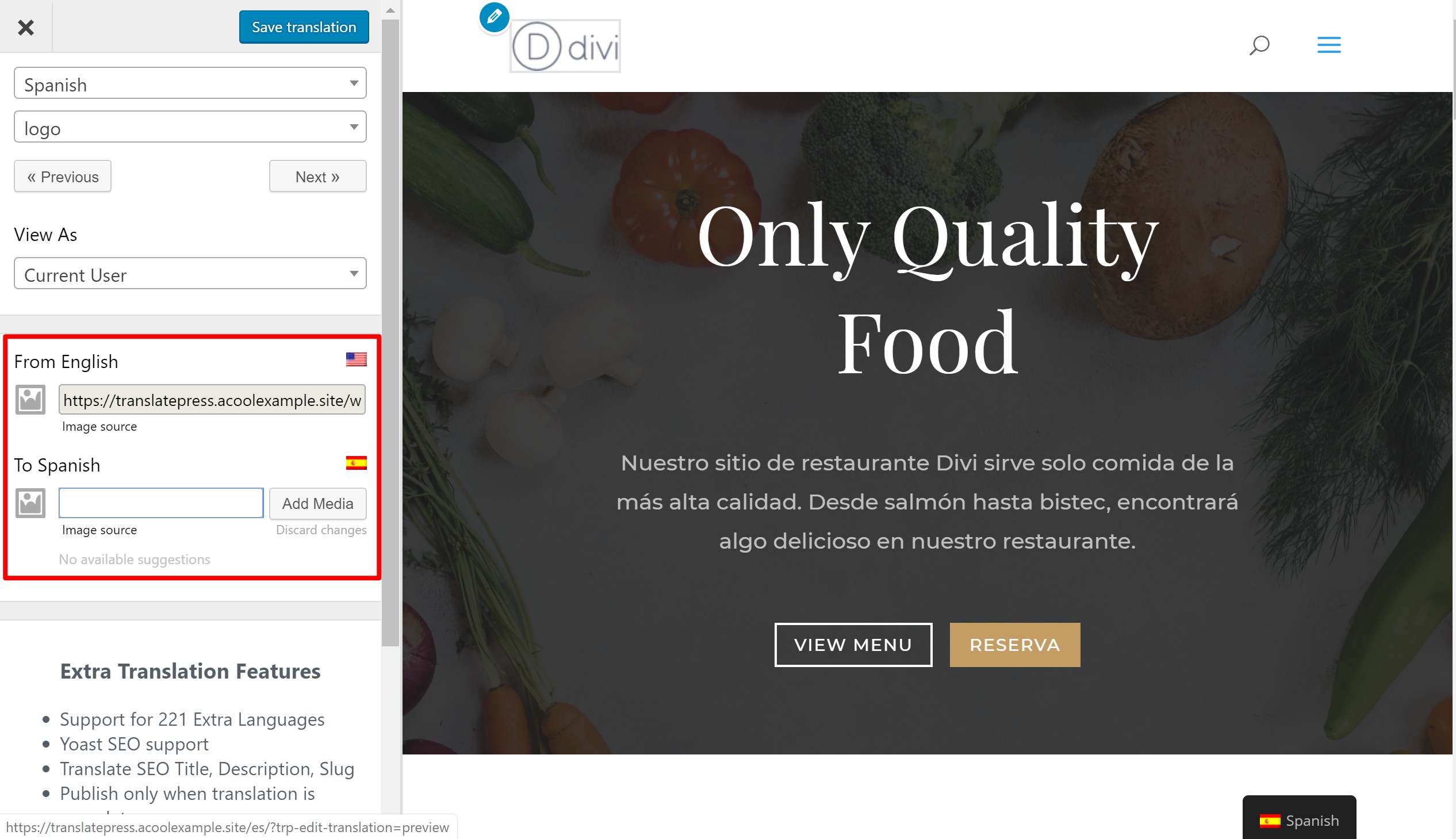 And it works the same for images in your content, or even images in a slider that you created with Divi’s slider module: 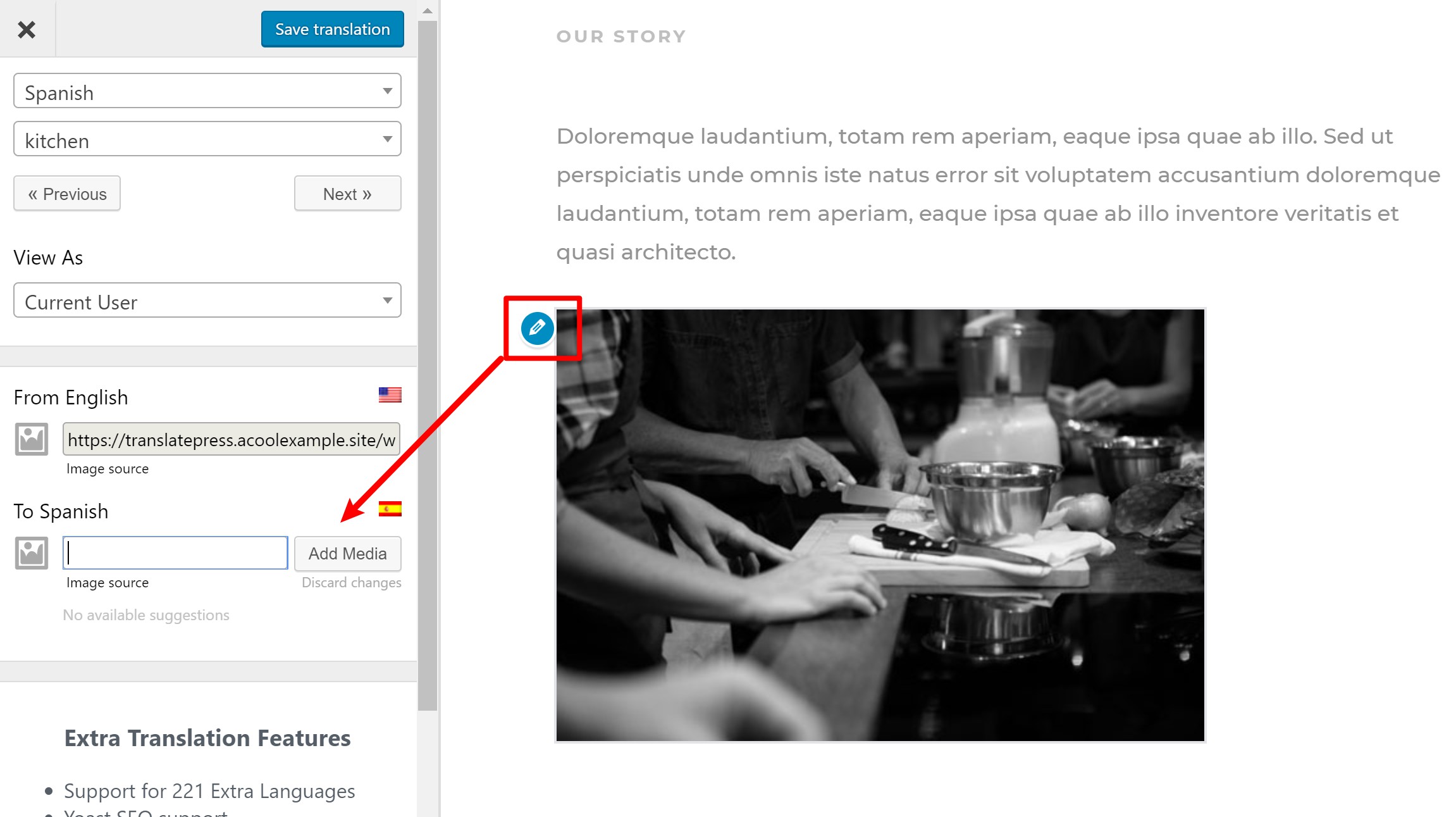 Finally, let’s look at one more specific example that’s relevant when you create a multilingual site with Divi – your forms.

Pretty much every single Divi website will make use of Divi’s contact form or email opt-in modules, so translating those modules is an important consideration when you translate a Divi site.

As you can probably guess by now, TranslatePress lets you use the same point-and-click approach to translate your forms, too.

You can even translate the placeholder text that appears inside form fields: 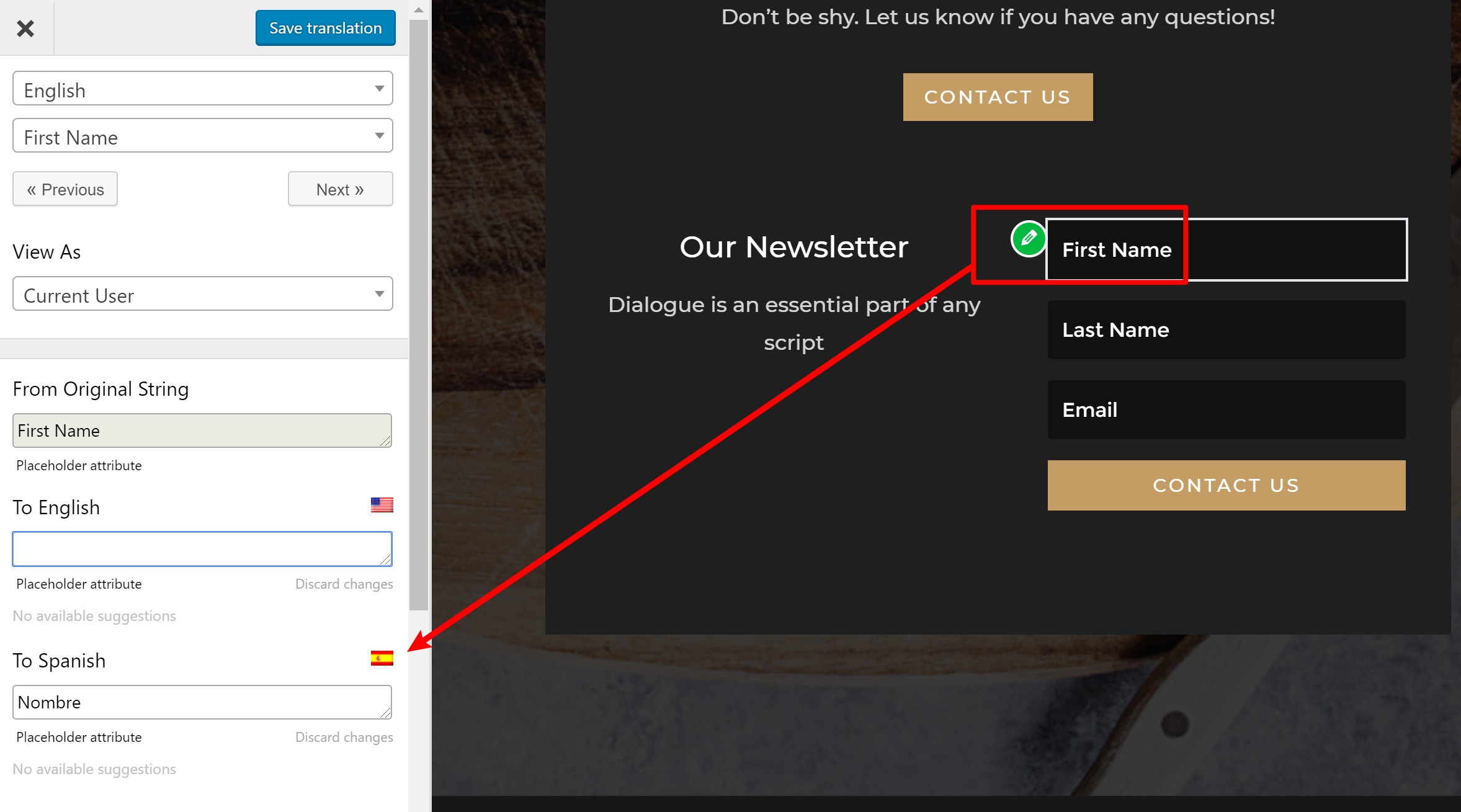 And there you have it! Whether you’re translating text, buttons, links, menu items, widgets, or anything else, translating your Divi site is as simple as point-and-click with TranslatePress.

By default, TranslatePress adds a floating language switcher to the bottom-right corner of your site, which you probably saw in the example screenshots above.

However, if you want to modify that default behavior, TranslatePress also gives you a couple of other options for where you add the language switcher to your multilingual Divi website.

One option is to add it as a navigation menu item, which you can do by adding the Language Switcher menu items (Appearance → Menus): 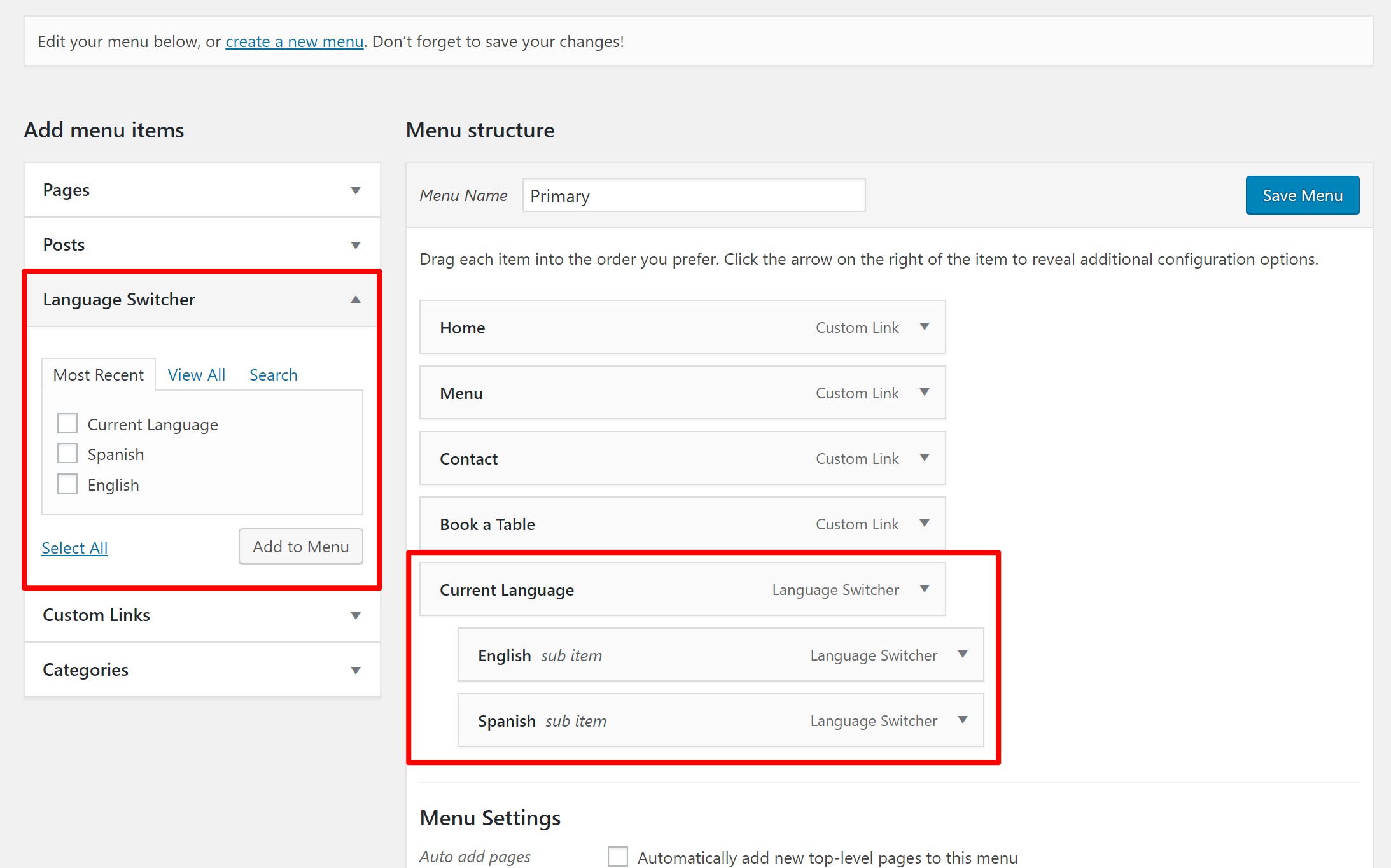 Here’s what that looks like on the front-end of your site: 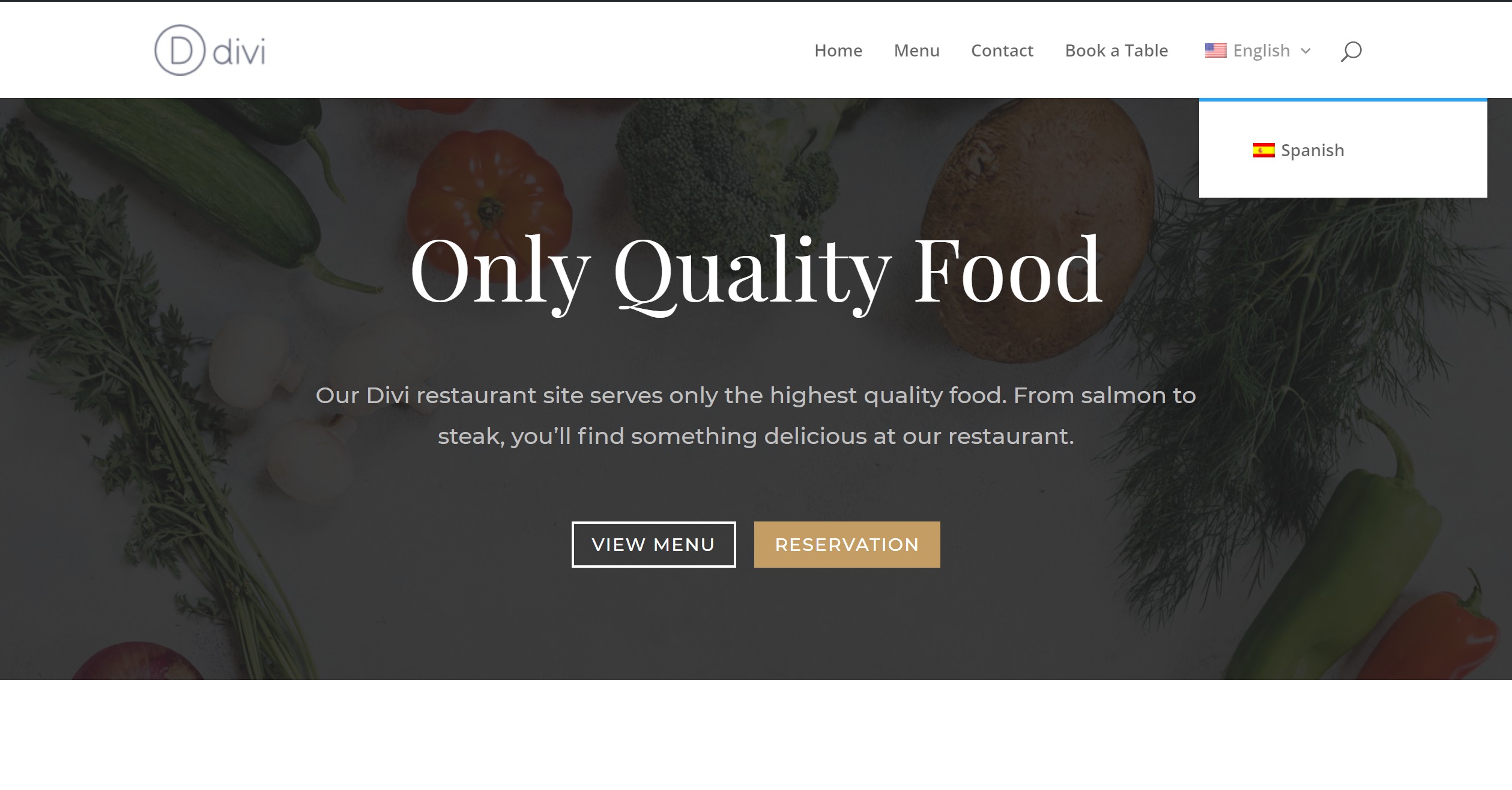 You can also display a language switcher with the [language-switcher] shortcode, which you can add in any widget, the native WordPress editor, or directly to your Divi content.

Divi gives you the power to build a beautiful WordPress site with a visual, drag-and-drop editor.

Then, TranslatePress lets you take that beautiful design and translate it into new languages using a similarly simple visual translation experience.

When you combine the two, you can build truly custom WordPress sites that are accessible to visitors from around the world.

To learn more about the premium features, head to the pricing page.