How to Translate Oxygen WordPress Sites (2022)
Skip to content

How to Translate Oxygen WordPress Sites

Looking for an easy way to translate an Oxygen WordPress website and go multilingual?

Oxygen is a popular WordPress website builder that offers clean code and deep support for dynamic content, which makes it a great option for anyone building custom WordPress sites for a living.

Oxygen lets you design your entire WordPress site using a visual, drag-and-drop interface, while still giving you access to the code underneath. It works for everything from business sites to WooCommerce stores, blogs, portfolios, and more.

One thing it doesn’t do, though, is let you turn your design into a multilingual site and offer your content and templates in multiple languages.

In this post, you’ll learn how to translate Oxygen websites into one or more new languages and create a multilingual site using the free TranslatePress plugin. Just like Oxygen’s visual, code-free approach, TranslatePress also gives you a simple visual translation interface to manage your site’s translations:

TranslatePress works out-of-the-box with all of your Oxygen designs, supporting everything from static designs to templates, dynamic content loops, and custom blocks that you’ve created with Oxygen. Any translations that you create are SEO-friendly and indexable, which helps you benefit from multilingual SEO.

You also have the option to use automatic translation from Google Translate or DeepL to save time. Or, you can enter all your translations from scratch using the visual editor.

Keep reading to learn exactly how to translate Oxygen with TranslatePress…

How to Translate an Oxygen WordPress Site: Step-by-Step Guide

If you’ve already created your site with Oxygen in your native language, you can jump ahead to step #2.

If you haven’t, you’ll first want to set up your Oxygen site in the default language that you want your site to use. Basically, before you can translate content into a new language, you need to have the content that you want to translate!

To speed things up, you can import one of Oxygen’s many pre-built sites: 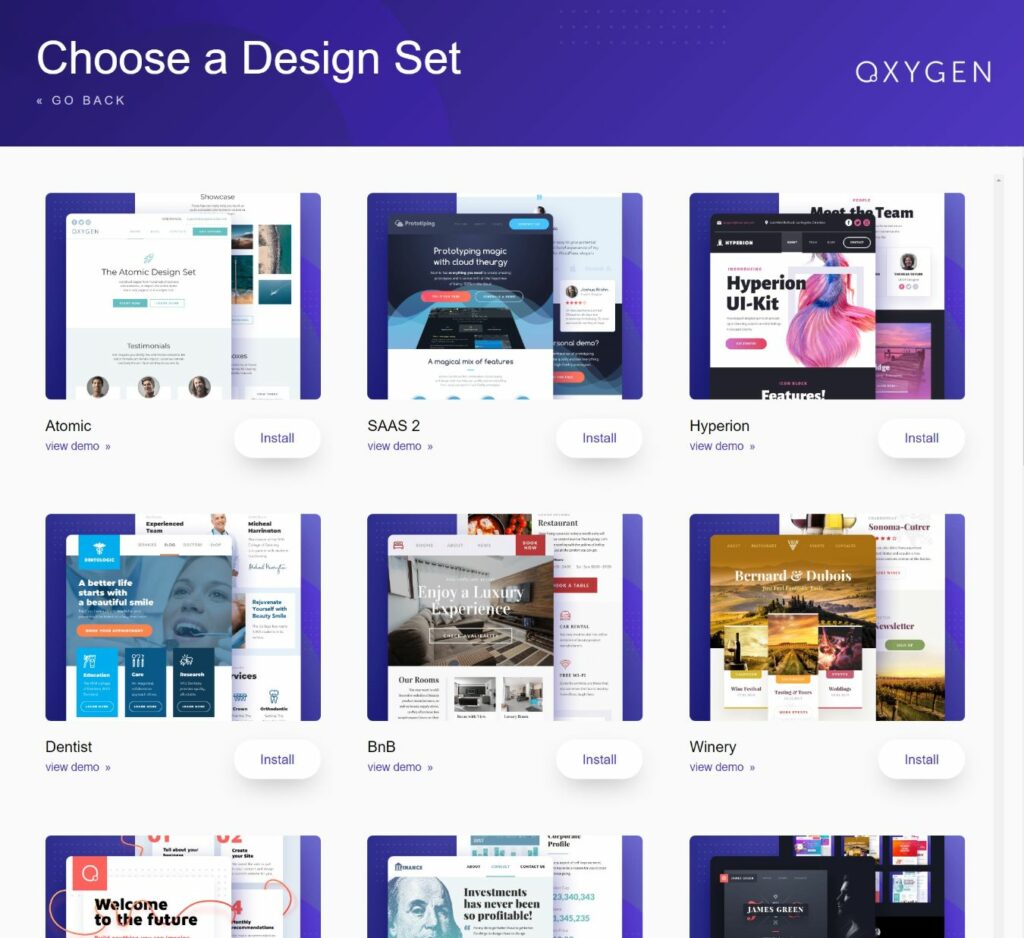 If needed, you can customize your one-off pages and templates using Oxygen’s visual editor: 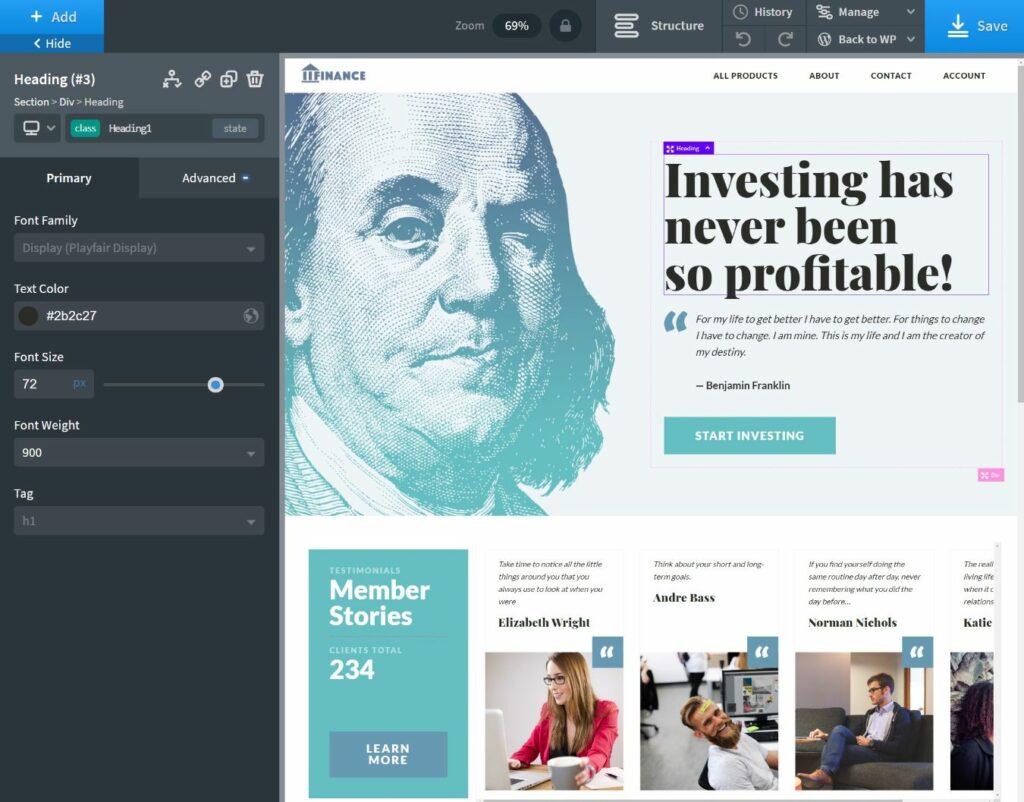 Then, once you’ve set everything up in your site’s native language, here’s how to translate it using TranslatePress.

To get started, install and activate the free TranslatePress plugin from WordPress.org. Then, go to Settings → TranslatePress to choose the language(s) into which you want to translate your content.

Here’s what it would look like to translate an English-language site into Spanish: 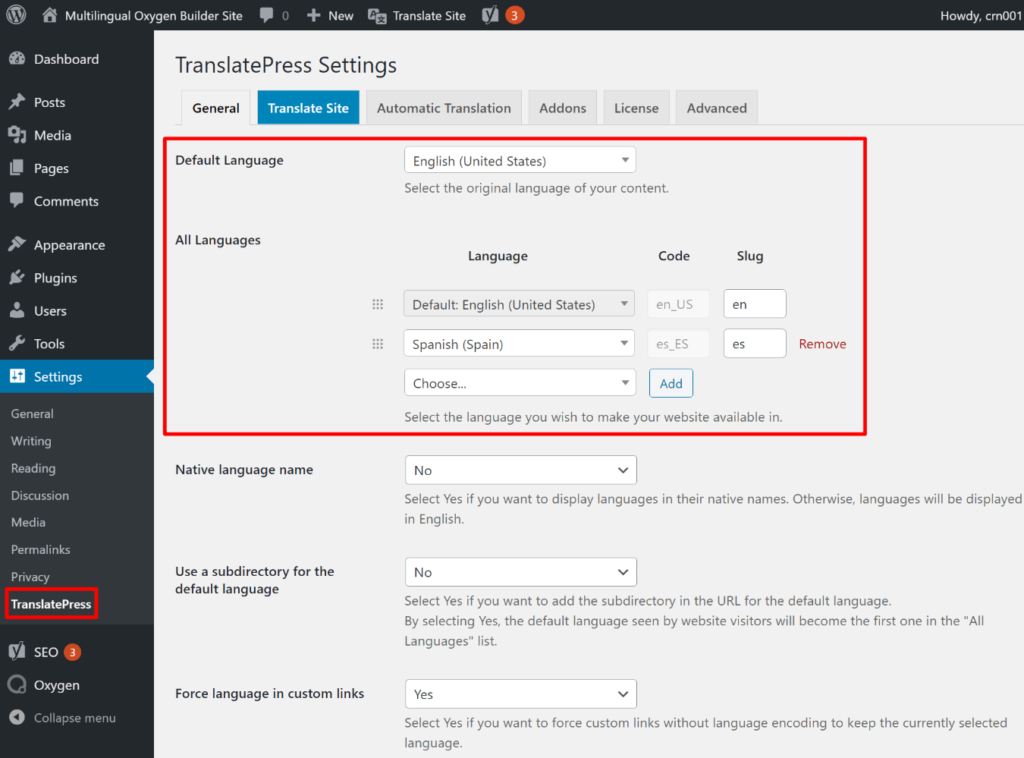 If you want to save time when translating your Oxygen site’s content, TranslatePress supports automatic machine translation via either Google Translate or DeepL.

You can use Google Translate with the free version of TranslatePress, while you’ll need to purchase the Business license to access the DeepL integration.

When you use automatic translation, TranslatePress will query those services to generate the translations, but it will store those translations locally in your site’s database. That means that:

If you want to set up automatic translation, you can do it from the Automatic Translation tab of the TranslatePress settings area. Here are setup guides for both services. 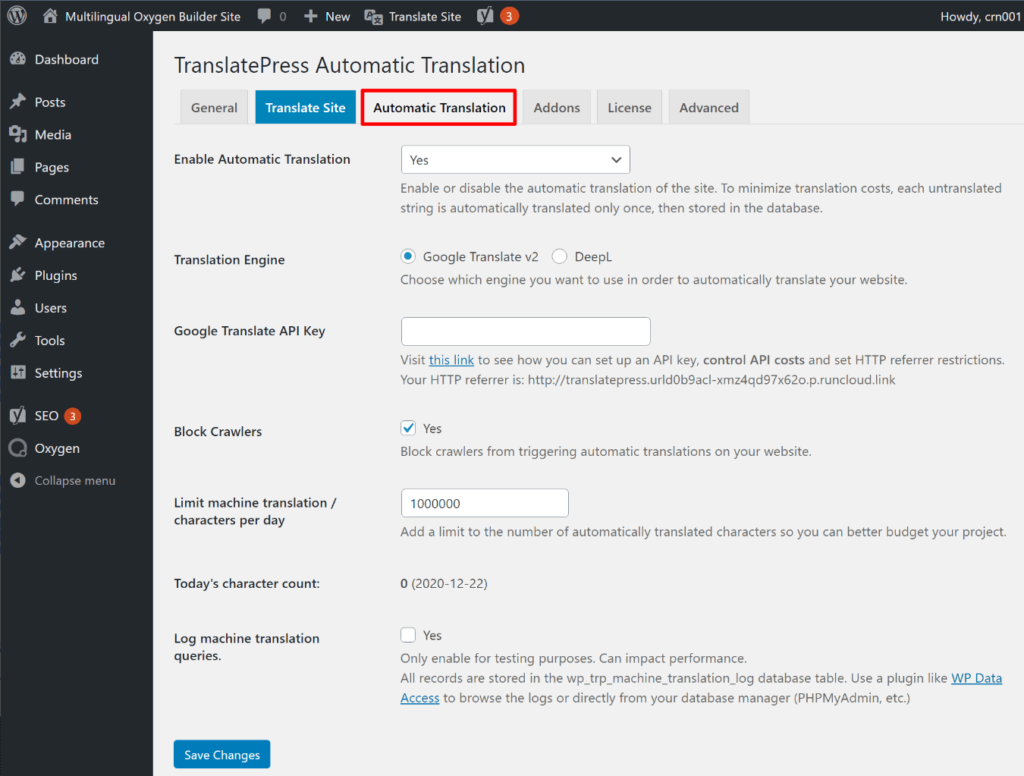 Now, you’re ready to start translating your Oxygen designs (or manually refining your translations, if you used automatic translation).

To access the visual TranslatePress editor, open the page that you want to translate on the front-end of your site and click the Translate Page button on the WordPress toolbar: 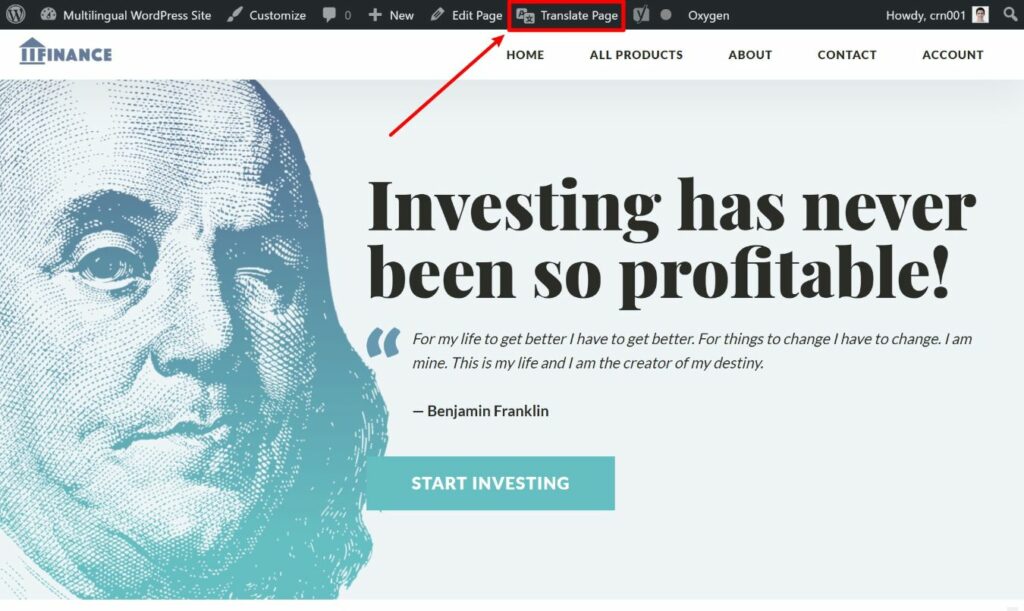 This will launch an interface that’s quite similar to the native WordPress Customizer. You’ll see a live preview of your site on the right and a sidebar on the left where you can manage your translations.

To translate any text/element, all you do is hover over it and click the pencil icon. That will open the translation in the sidebar, where you can add/edit the translation:

Examples of How to Translate Specific Elements in Oxygen

Again, you’ll use the same visual interface from above to translate virtually every single part of your Oxygen site.

The technique is always the same – you hover over the element that you want to translate and click the pencil icon. With that being said, it might be useful to cover how to translate some specific parts of your Oxygen site, which is what we’ll do below.

How to Translate Oxygen Images

You might have situations where you want to display different images based on a user’s language. For example, the finance demo site from Oxygen includes a chart image with English text, which you’d probably want to translate to your other language(s).

TranslatePress makes it easy to translate any image. Just as with text, you can hover over the image and click the pencil icon. Then, you’ll be able to choose a different image file to use for each language: 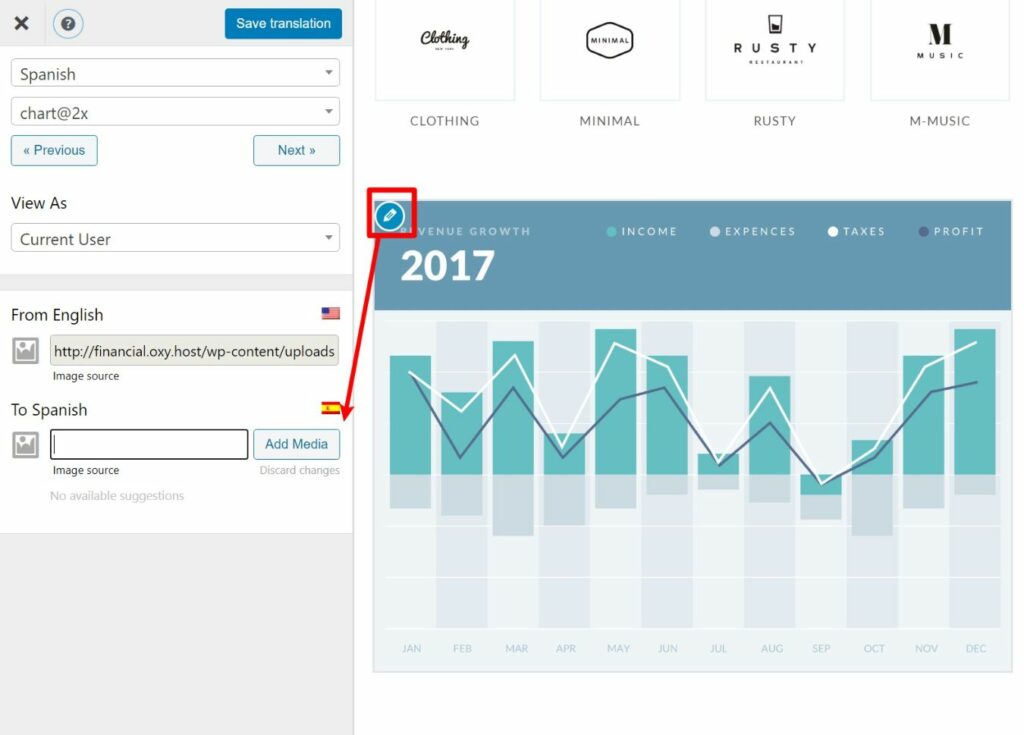 If you’ve added image alt text, you’ll also be able to translate that if you have the SEO Pack add-on, which is available on the Personal license.

How to Translate Oxygen Header Builder

To help you design your site’s header and navigation, Oxygen includes its own Header Builder. You can use this feature to control your navigation and also pull in navigation menus from the native WordPress menu feature.

TranslatePress makes it easy to translate all of these elements. For example, you’ll be able to translate both your individual menu items, as well as other content like your logo image and tagline: 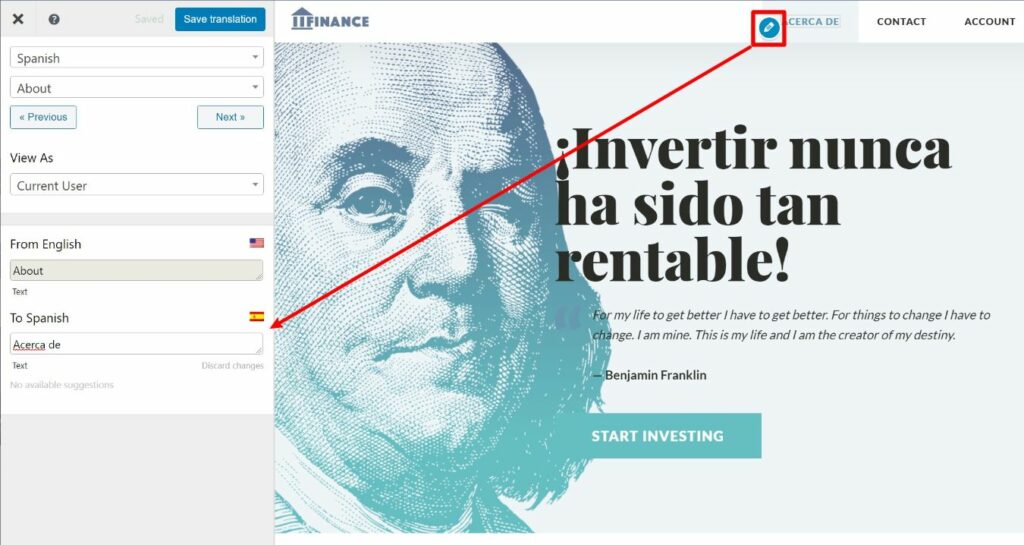 If you purchase the Business license, you even have the option to use completely different navigation menus based on a user’s language (rather than just translating the same set of menu items into different languages, as the free version allows).

Because Oxygen handles dynamic content so well, it makes a great option for membership sites or other types of dynamic sites where different users might see different content depending on their role and access privileges.

To handle these situations, TranslatePress offers a “View As” drop-down that lets you browse (and translate) your site’s content as different types of users.

With the free version, you can browse as anonymous vs logged-in users, while the Business license lets you browse your site as any user role: 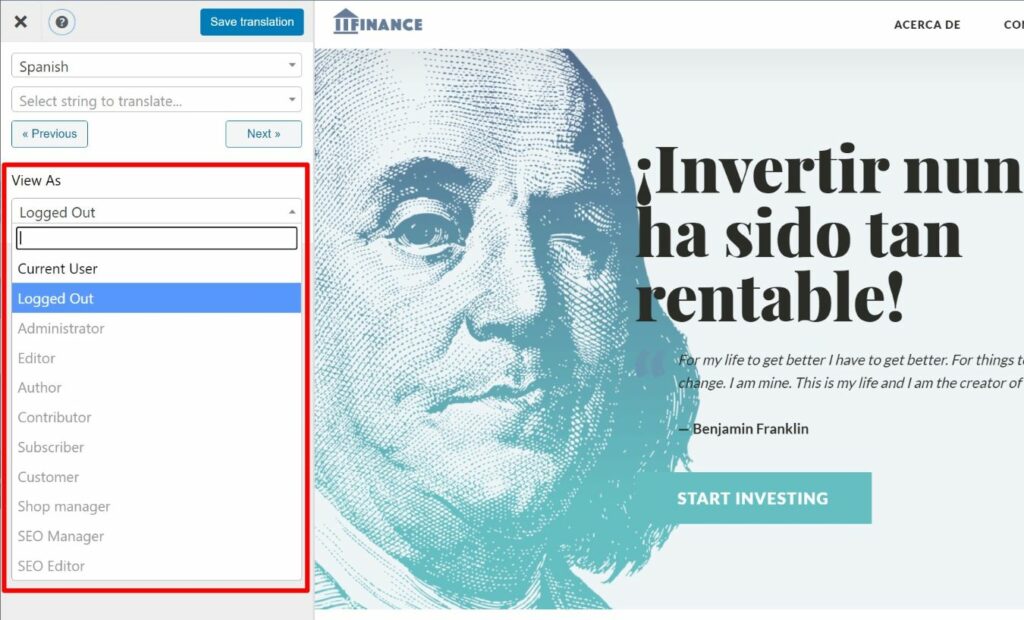 How to Translate WooCommerce Products

You’ll be able to translate both gettext strings from the WooCommerce plugin (marked with a green pencil icon) and unique content from your products/that you’ve added with Oxygen (marked with the regular blue pencil icon).

For example, here’s a simple single product template created with the Oxygen Product Builder block – you can still translate all of the elements: 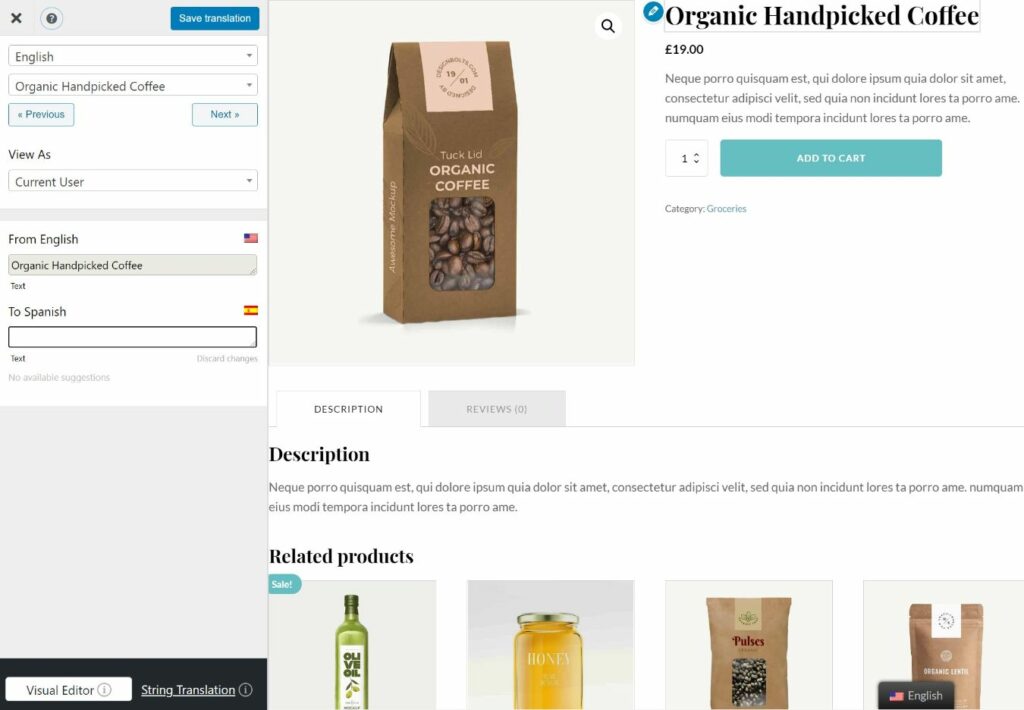 How to Translate Oxygen Blocks

One of the most unique features in Oxygen is the ability to design your own custom blocks to use in the WordPress block editor (this feature requires the Agency license). TranslatePress makes it easy to translate any of these custom blocks (as well as all other WordPress blocks).

Here’s a simple CTA block that we created with Oxygen: 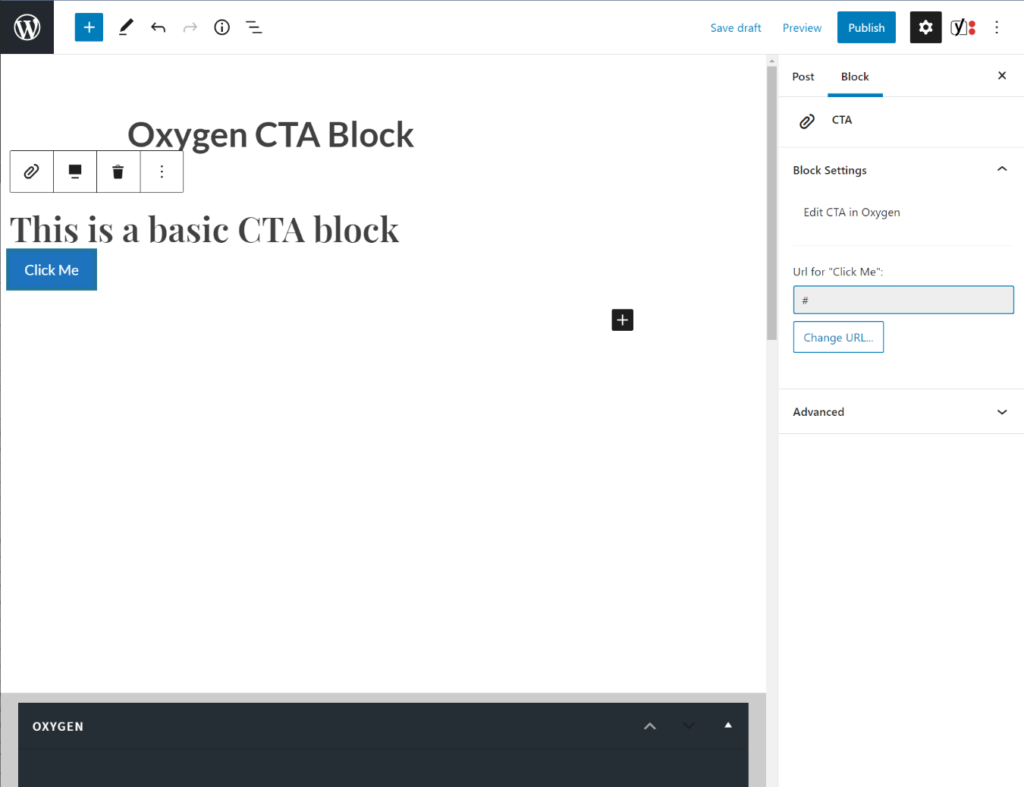 You could then translate that block when editing that piece of content’s translations: 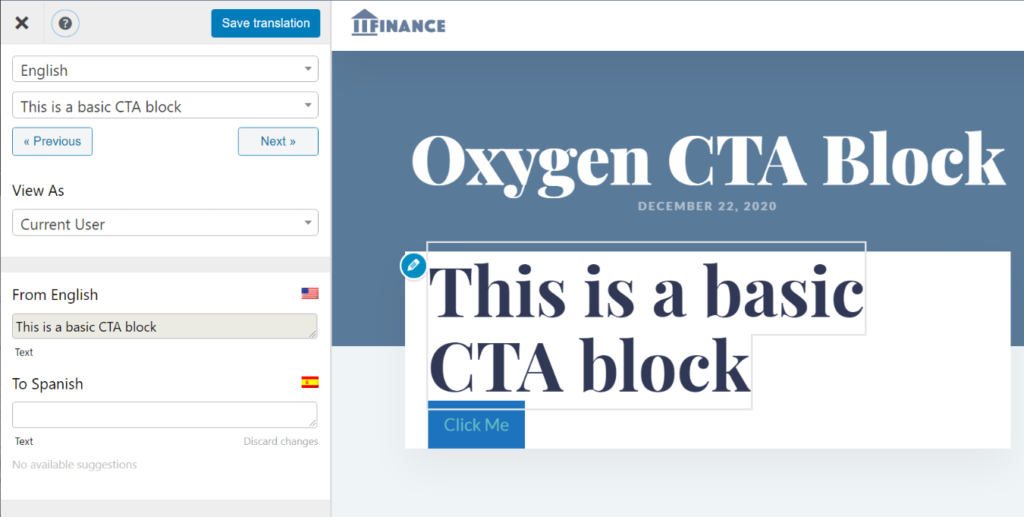 If you want to see even more examples, we have lots of other tutorials on ways in which you can use TranslatePress. These tutorials aren’t specific to Oxygen, but all the same basic principles will apply since TranslatePress offers full out-of-the-box compatibility with Oxygen:

To help you do this, TranslatePress has another dedicated Oxygen integration that lets you show/hide an element based on the language that a user has selected.

To set this up, go to the Oxygen editor interface and open the element that you want to language restrict. Then, click the Condition Settings icon and then Set Conditions: 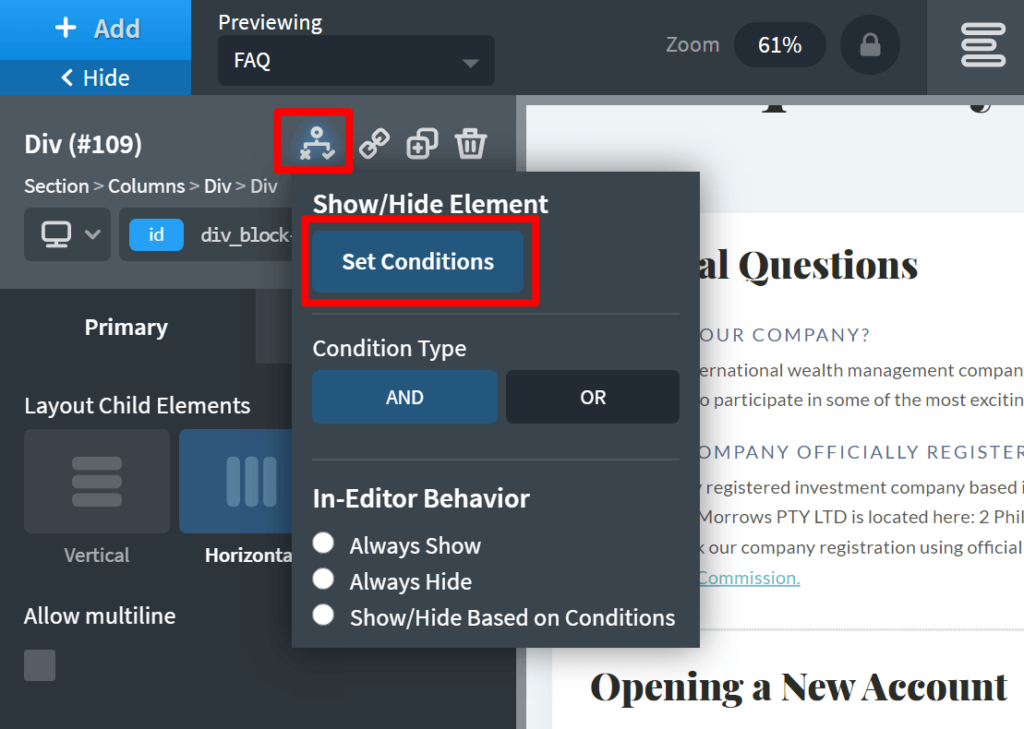 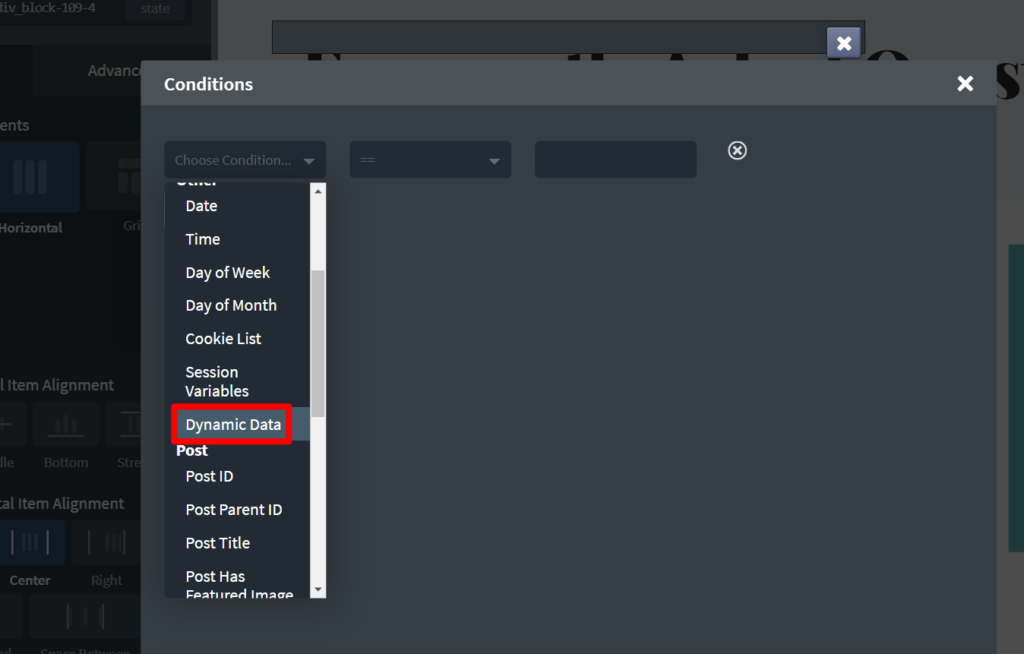 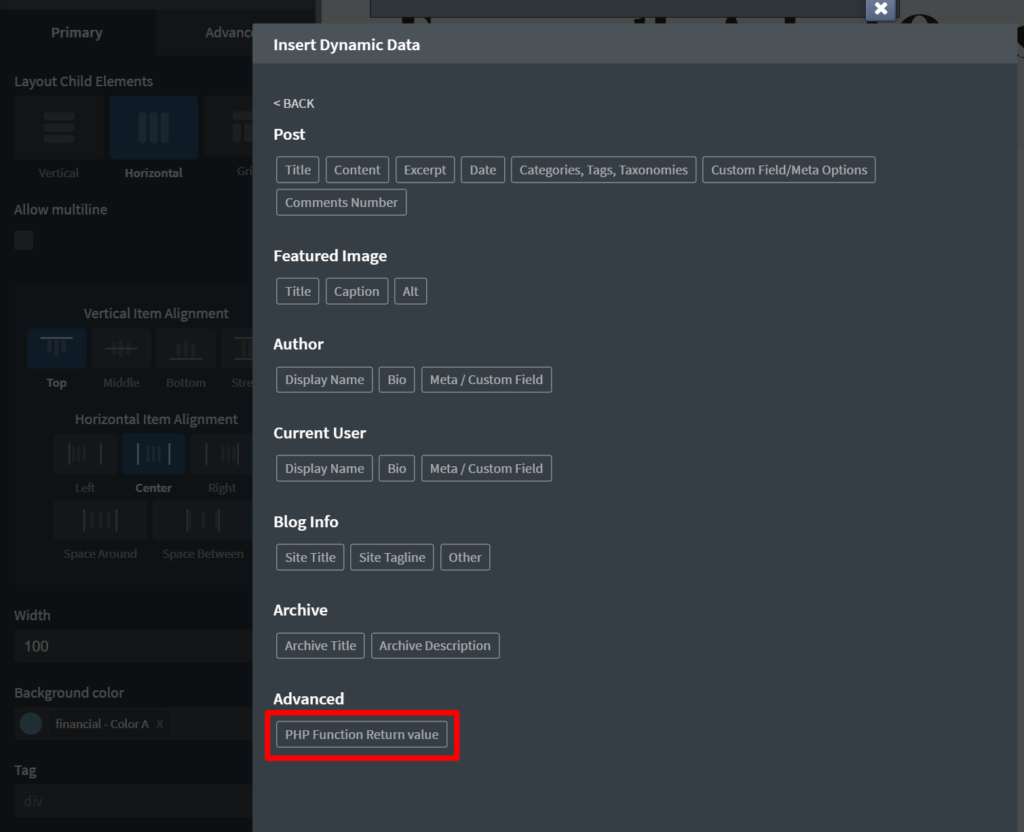 Set the Function Name equal to get_locale and then click Insert: 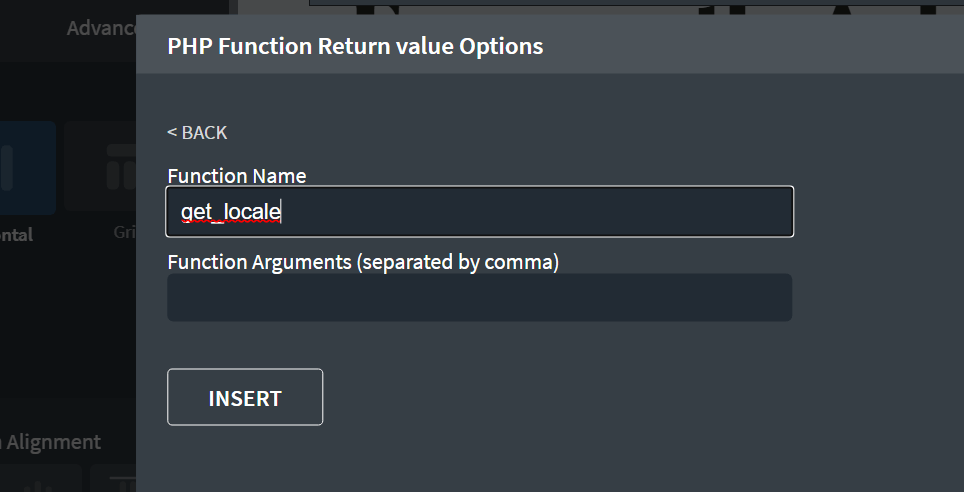 Then, set the custom value equal to the language code for the language that you want to target (you can find this code by going to Settings → TranslatePress and looking in the Code column of the All Languages section):

You can also use rules to exclude entire pieces of content from translation if needed.

To place your language switcher, you have a few options:

You can also make additional choices, such as whether or not to display language flags, by going to Settings → TranslatePress.

Oxygen is one of the best tools for building custom WordPress sites without needing to code everything from scratch. However, it only lets you create your site in a single language.

With the free TranslatePress plugin, you can fix that and translate 100% of your Oxygen content into one or more new languages.

You can get started with the free version of TranslatePress at WordPress.org. Then, upgrade to the premium version to get more useful features for your multilingual Oxygen website: