Looking for the best solution for WordPress string translation?

In this post, we’re going to show you how to translate any string on your WordPress site using TranslatePress and its simple visual editor.

No matter where it comes from, TranslatePress will automatically detect every string on the front-end of your site right out of the box (and even some on the backend, like Yoast SEO settings). Then, you’ll be able to translate each string using one unified interface – no jumping back and forth between separate interfaces like some other plugins force you to do:

You can be translating your site in just a few minutes – for free!

What Are the Different Types of WordPress Strings?

If you want to fully translate a WordPress site, you’ll need to deal with content from a lot of different places.

The most obvious is content from the WordPress editor. But you’ll also need to translate other content such as:

What You Need for WordPress String Translation

To translate the strings on your site, you need a WordPress translation plugin.

Here, there are some differences.

Some plugins only let you translate certain types of strings.

TranslatePress is a free WordPress translation plugin with a unique approach to string translation.

Rather than using separate interfaces and/or requiring you to manually mark some strings for translation, TranslatePress…

All you need to do is click on the string that you want to translate and you’ll be able to edit it:

Or, you’ll also be able to search for strings using a real-time search.

Basically, no matter where the strings come from, TranslatePress will let you translate them from this visual interface.

Beyond making it easy to translate 100% of your site, TranslatePress also:

How to Translate All Types of WordPress Strings

Now, let’s get into the step-by-step guide for how you can use TranslatePress for WordPress string translation.

To get started, install the free TranslatePress plugin from WordPress.org.

Then, go to Settings → TranslatePress to choose the language(s) into which you want to translate your site. 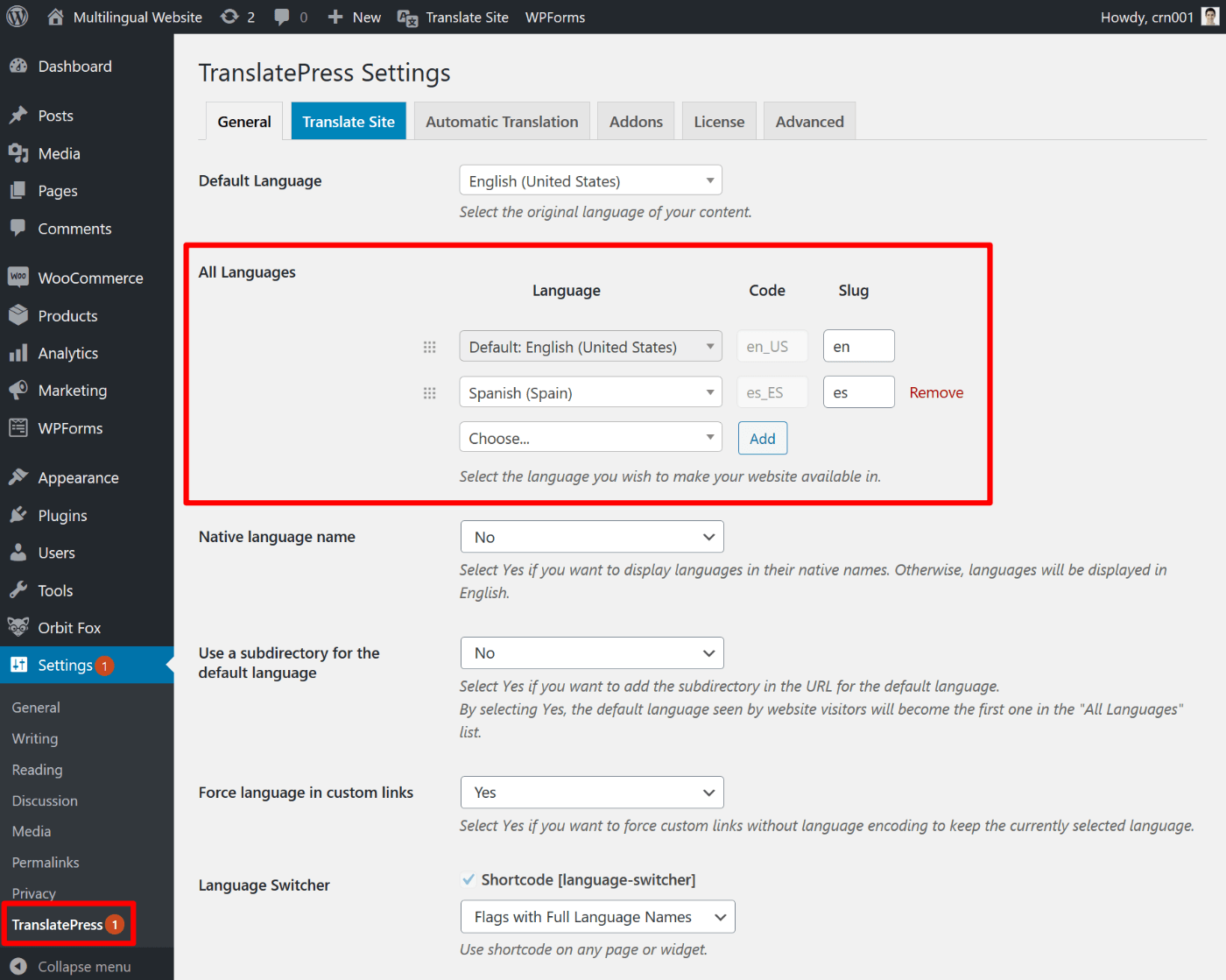 TranslatePress also supports automatic string translation via Google Translate or Deepl. You can use these services to generate baseline translations for every single string on your site and then go back and make manual edits if needed.

Once you’ve chosen your language(s), open the piece of content that you want to translate on the front-end of your site. Then, click the Translate Page button on the WordPress toolbar to open TranslatePress’s visual translation editor: 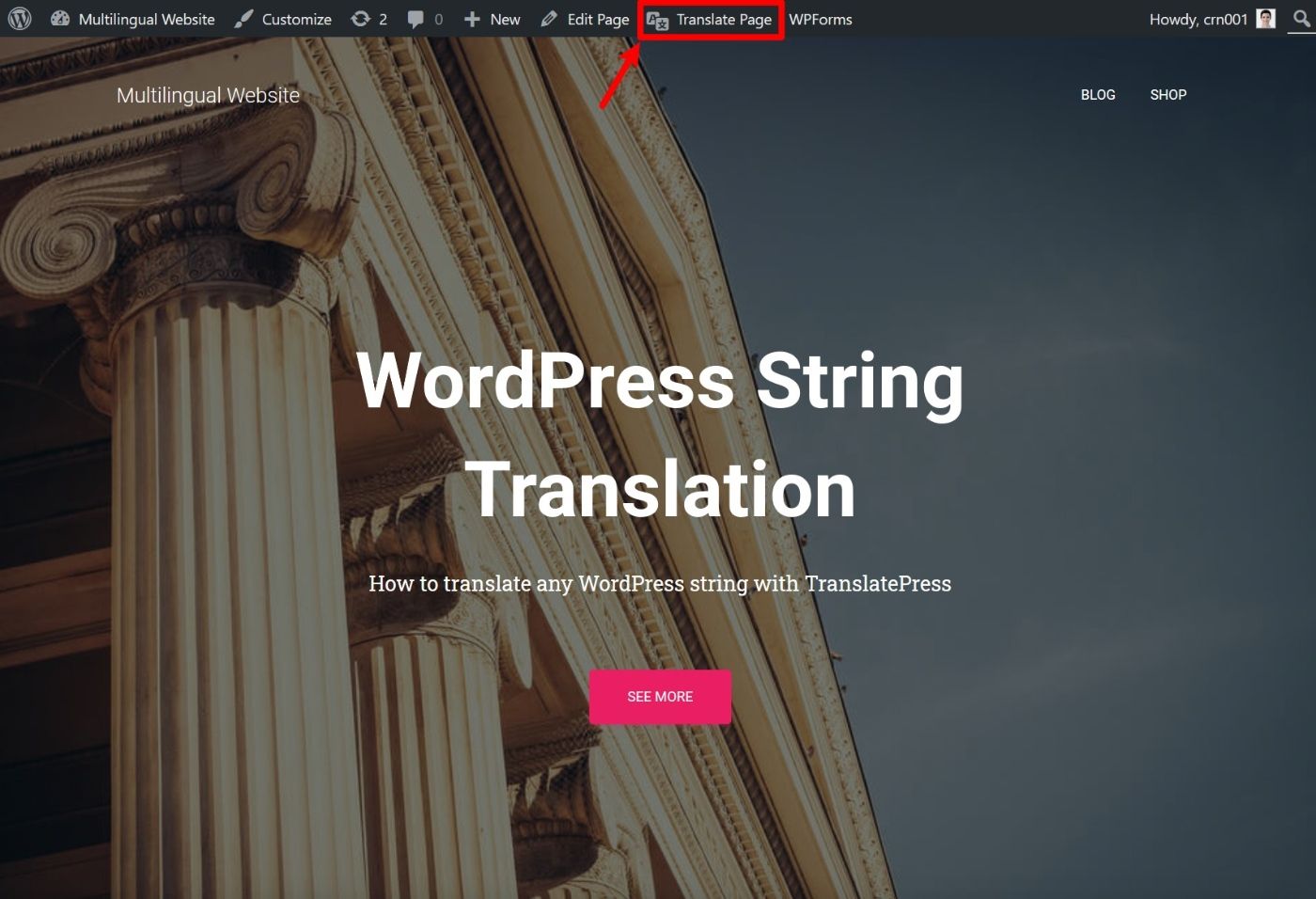 To translate a string, all you need to do is hover over the text and click the pencil icon. That will open the string’s translation in the sidebar, where you can add your translation:

You can also use the drop-down in the sidebar to directly search for certain strings. In some cases, you might find it faster to search than click on the live preview. After searching for the string, you’ll be able to translate it in the same sidebar: 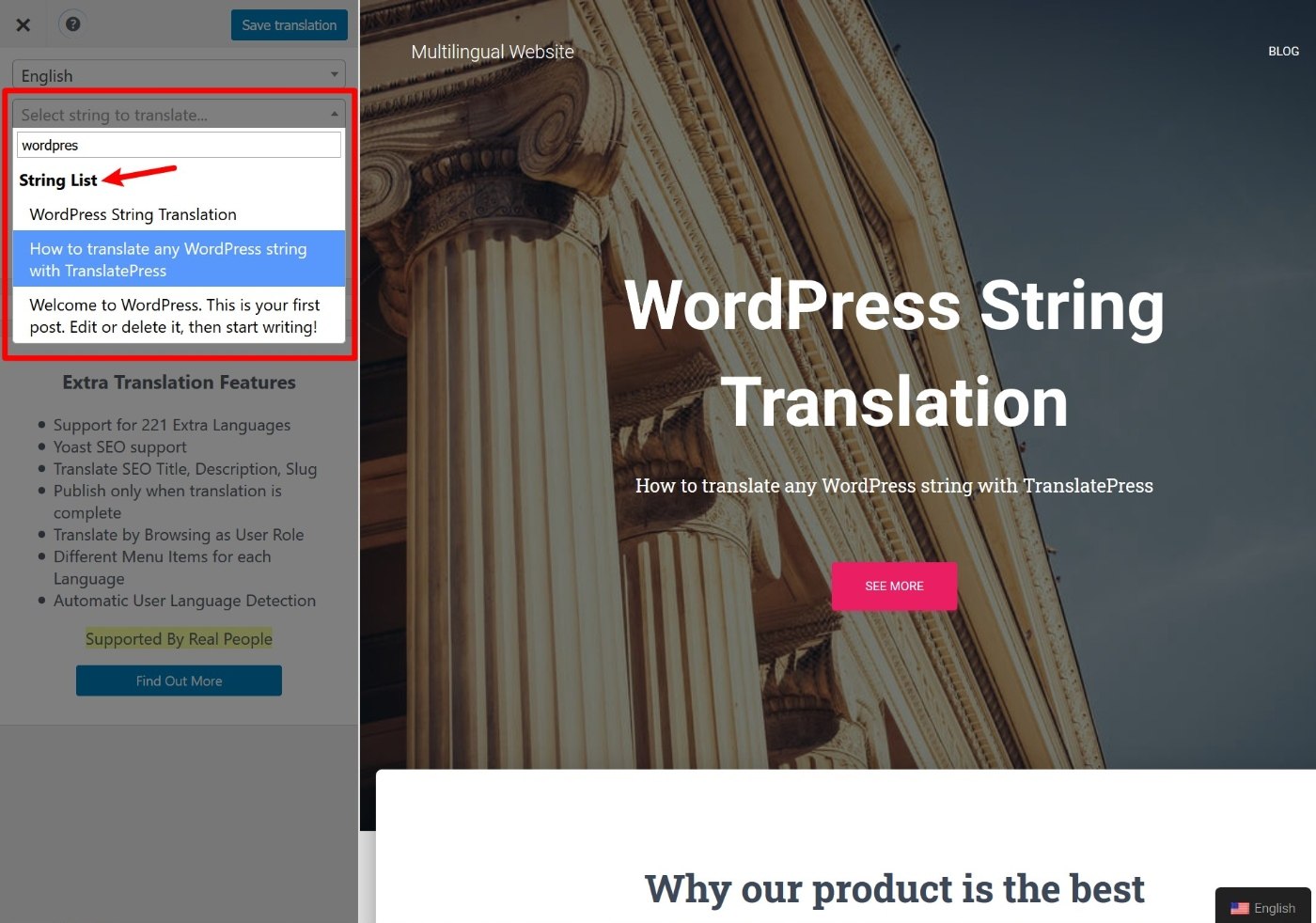 The general process is the same no matter what type of content you’re translating, but let’s go through some examples to drive home the point…

To help you quickly see which strings come from gettext, TranslatePress will automatically mark all gettext strings with a green pencil icon (as opposed to the normal blue icon).

If you’re not familiar with this term, gettext strings are strings that are hardcoded into your theme or plugin. The gettext filter lets you easily translate those strings. Learn more about gettext.

For example, the bit of text in your theme that lists “Categories”. The individual categories would not be gettext, but the text that proceeds those categories would be. You can see an example below, as marked by the green pencil icon: 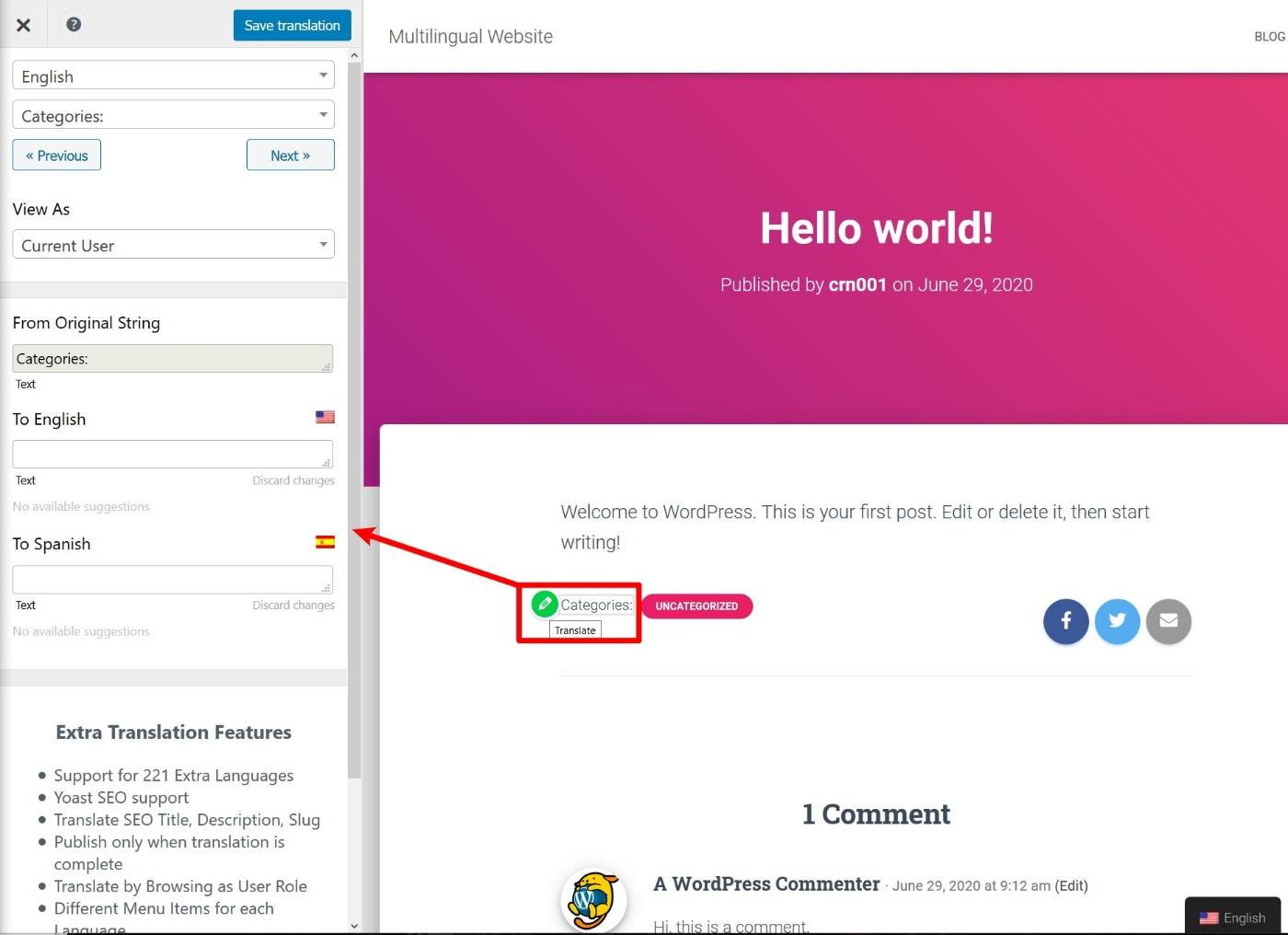 When you translate gettext strings, you’ll be able to translate both the original version (in your site’s native language) and the translated version.

If your theme or plugin already includes translations for a certain gettext string, TranslatePress will pre-fill that translation, but you still have the option to edit it.

TranslatePress will also automatically apply these translations to every single instance where gettext appears. That is, you won’t need to manually translate gettext strings on every page.

Most themes will have additional content beyond gettext. For example, the Hestia theme gives you options in the WordPress editor to customize the one-page homepage design.

TranslatePress works for these strings just like any other. The animated GIF that we showed you earlier is actually a good example of translating these user-generated theme strings:

? How to translate a WordPress theme

TranslatePress can help you translate any string from a plugin, whether or not it’s gettext. This includes forms, WooCommerce products, page builder content, etc.

Some parts of the translation, such as the “Add to Cart” button, are gettext:

Others, such as the user-generated product title and description, have the regular blue icon: 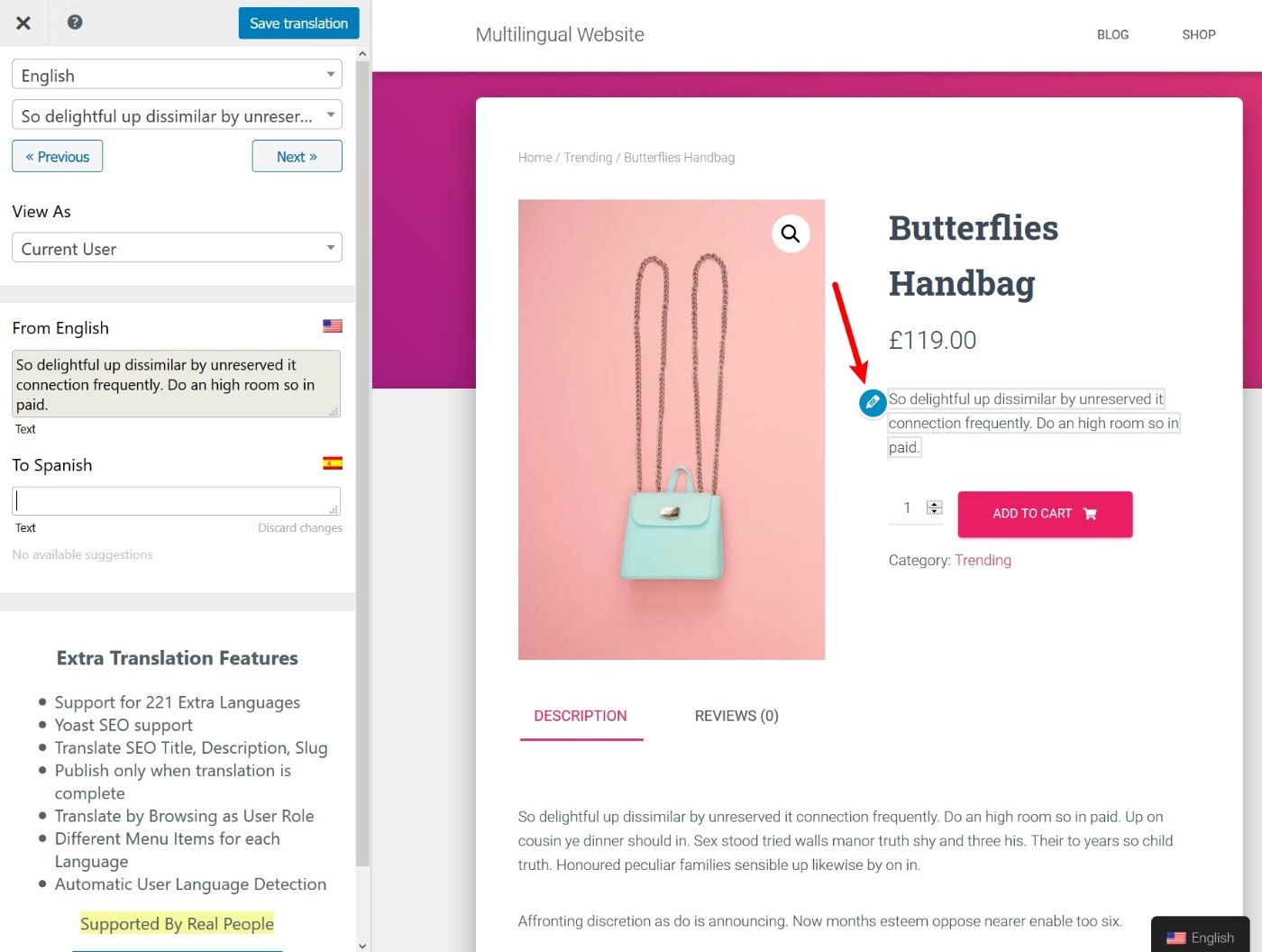 Here are some tutorials for translating specific types of plugin content:

Menu items work just like any other type of string: 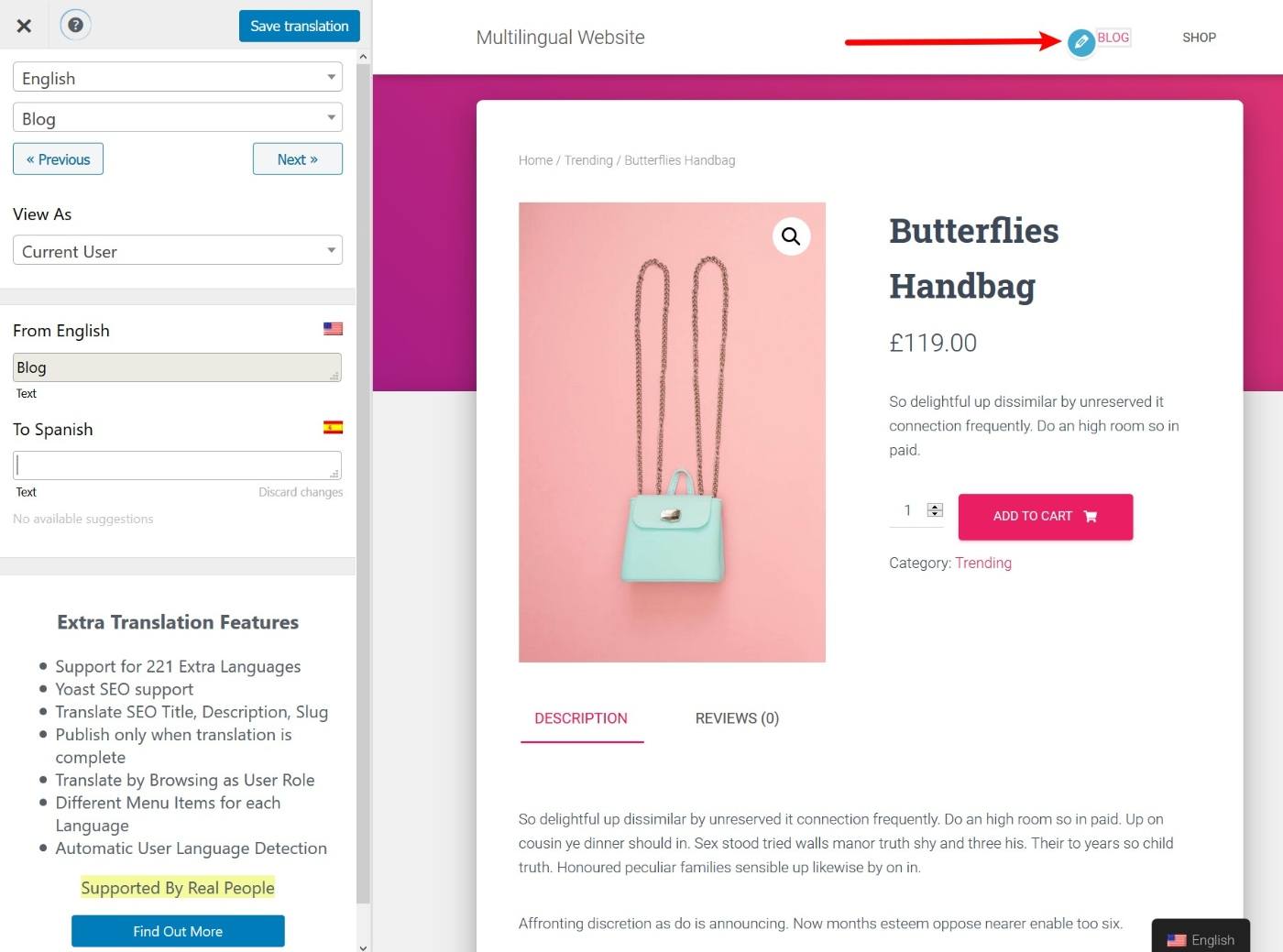 ? How to translate WordPress menus

You can use the same approach for WordPress widgets. Some widget strings will come from gettext (green icon), while others are user-generated. Either way, you’ll be able to translate them from the visual interface: 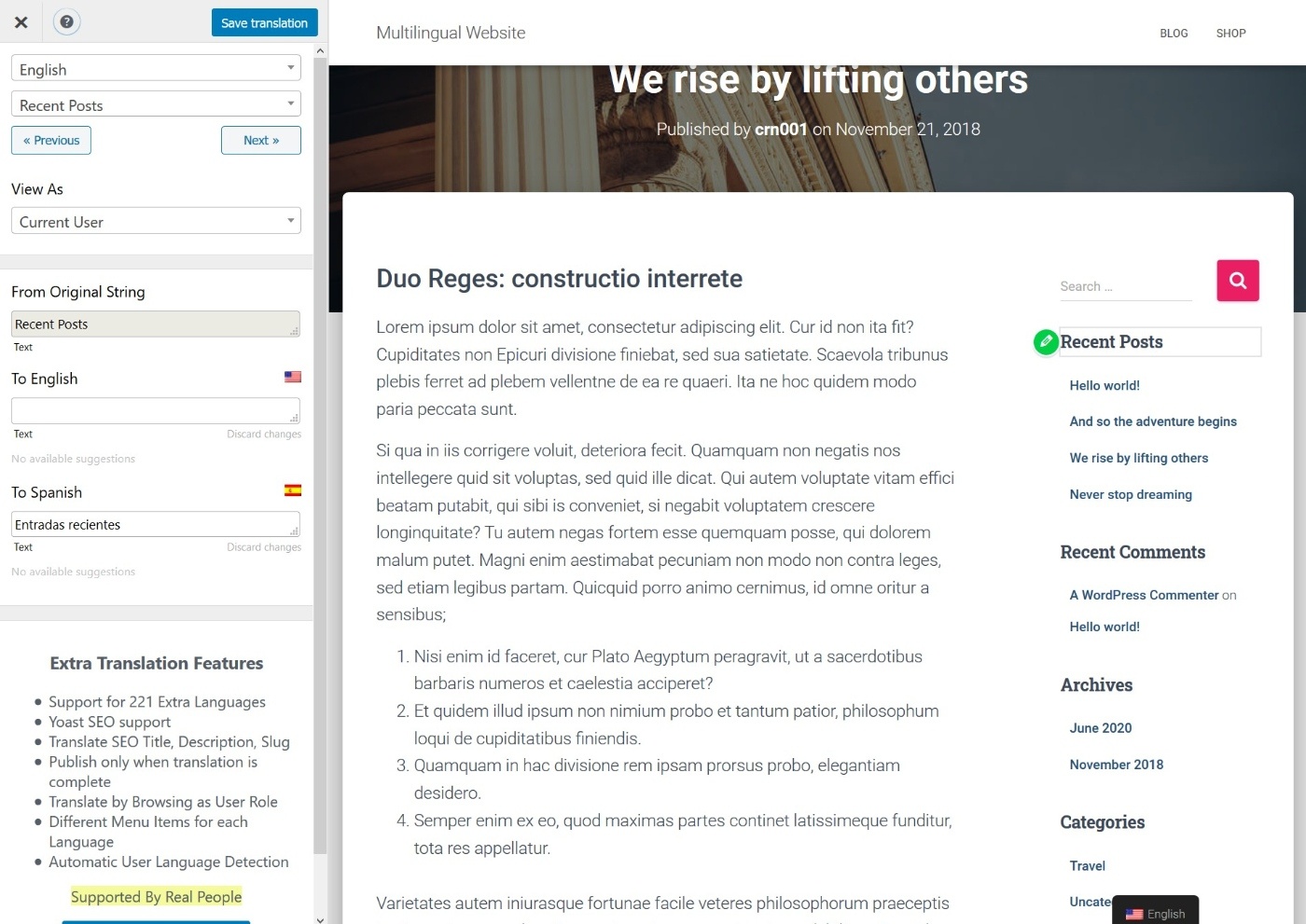 You can also show different widgets based on a user’s chosen language.

? How to translate WordPress widgets

We haven’t talked about it so far, but you can, of course, also use the same interface to translate any content that you’ve added in the WordPress editor (either the block editor or the Classic TinyMCE editor): 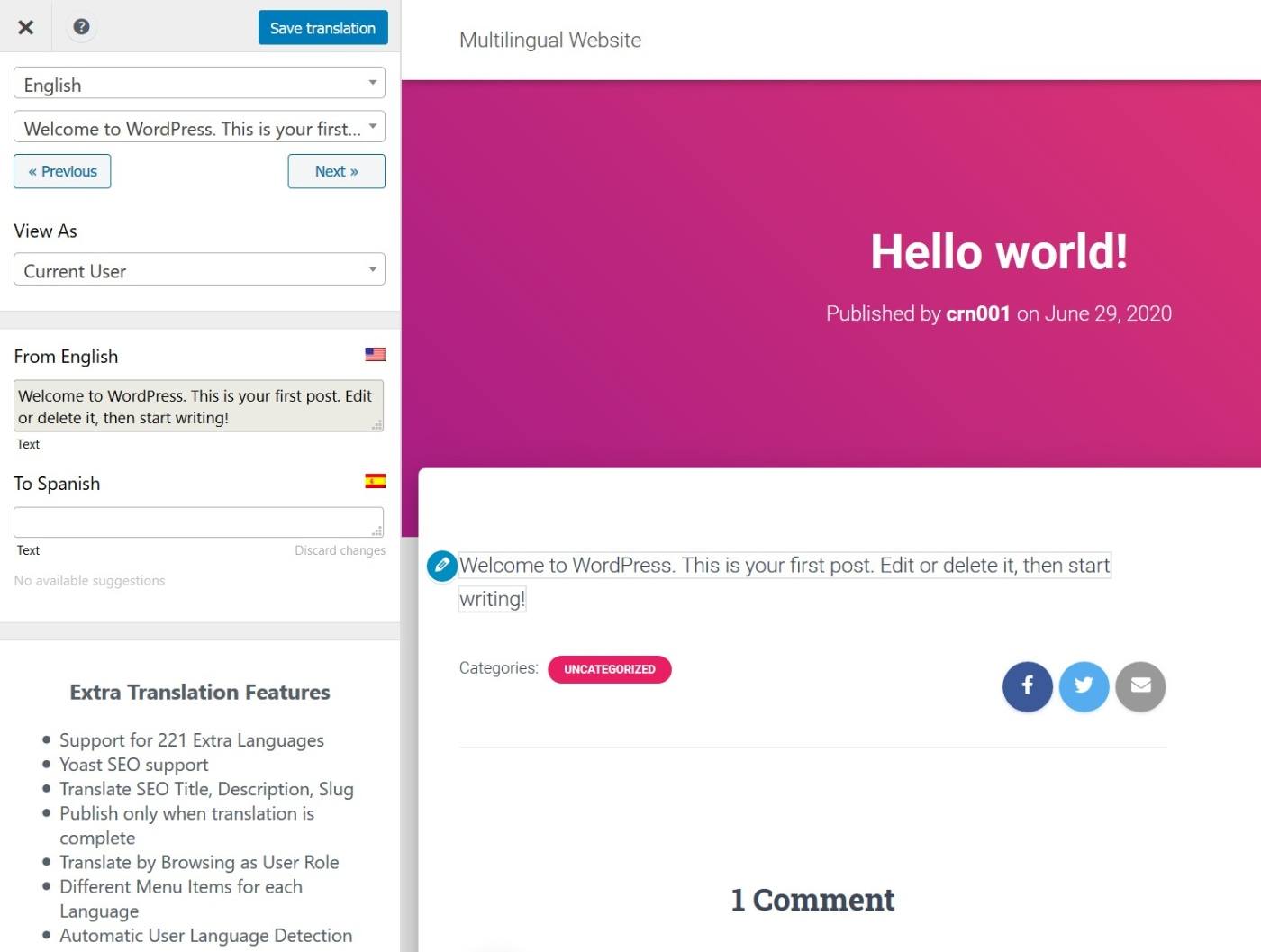 Here are some guides to help:

Finally, TranslatePress isn’t limited to translating strings! You can also use it to “translate” media content to better localize your site.

All you need to do is hover over the image and click the pencil icon. Then, you can select a different image file to use for each language and also translate the alt text: 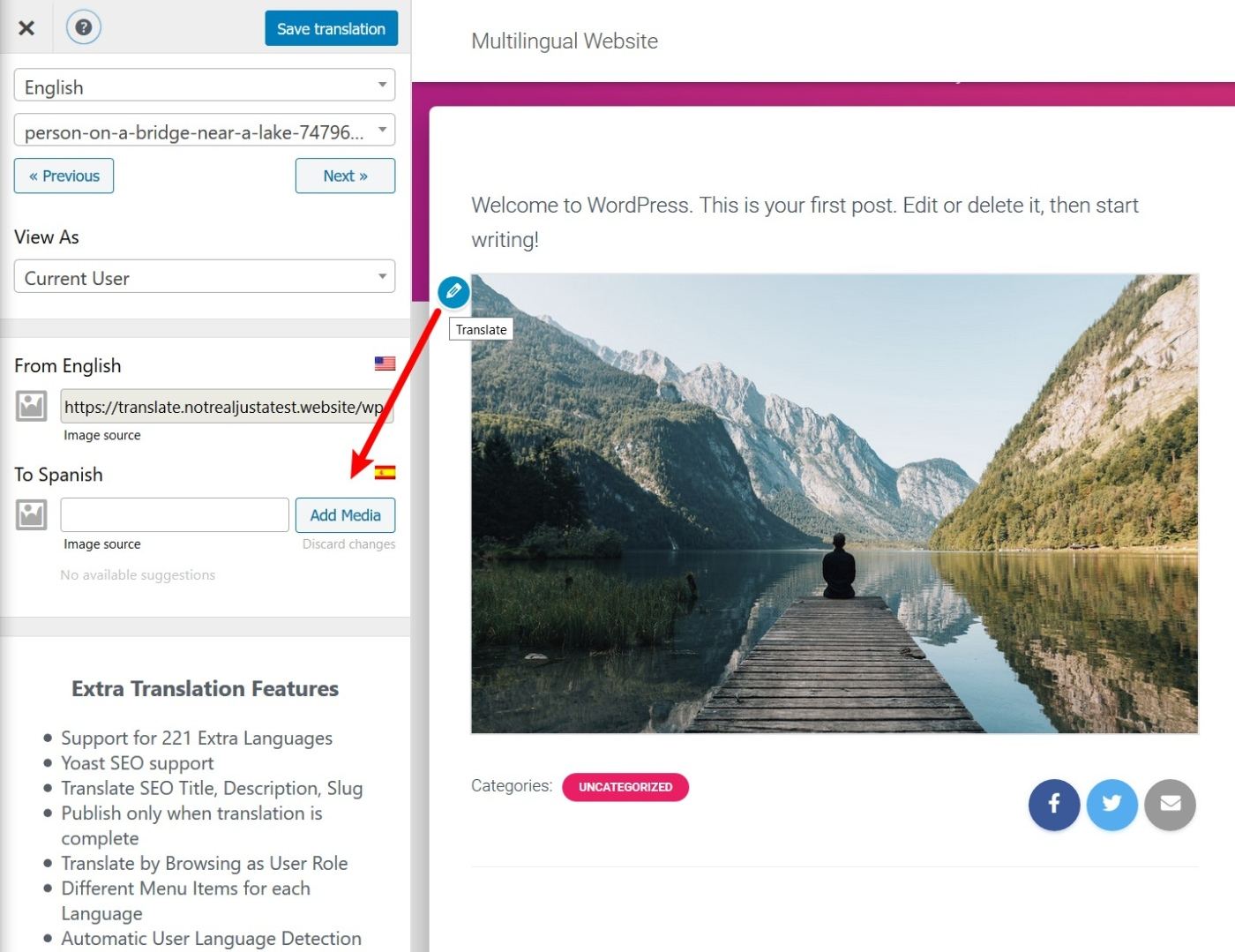 ? How to translate images

You can use this same approach to translate all types of images and media content, including sliders.

If you want to fully translate your WordPress site, you need a way to easily translate strings from gettext, user-generated theme or plugin content, menus, widgets, etc.

Some plugins force you to use separate interfaces and/or manually register strings for translation, which adds complexity and effort.

With TranslatePress, you can eliminate both problems:

You can get started with the free version of TranslatePress at WordPress.org.

Then, consider upgrading to the Pro version to access powerful new features:

One thought on “WordPress String Translation: Tutorial & Easiest Plugin to Translate Any String”