How to Make Yoast SEO Multilingual with TranslatePress
Skip to content

Yoast SEO is an excellent tool for optimizing your site’s SEO in its native language, but Yoast SEO is monolingual, so you’ll need some help to apply it to multiple languages.

In this post, you’ll learn how to use the TranslatePress plugin to make Yoast SEO multilingual by:

The TranslatePress plugin can also help you translate the rest of your site’s content, including all the content from your theme and plugins.

What You Need to Make Yoast SEO Multilingual

In order to translate content from Yoast SEO, you’ll need two things (beyond Yoast SEO itself, of course):

You can download the core TranslatePress plugin for free from WordPress.org, but in order to use the SEO Pack add-on, you’ll need a premium version of the plugin.

Below, we’ll show you how to translate all of the important Yoast SEO metadata on your multi-language website.

1. Set Up Yoast SEO in English (Or Your Native Language)

Before you can start translating Yoast SEO, the first step is to set up all of the Yoast SEO details in your site’s native language.

If you haven’t already, you can use the regular Yoast SEO meta box just as you usually would. Scroll down to the end of your content on any page in the ‘edit’ mode to add your SEO title and meta description: 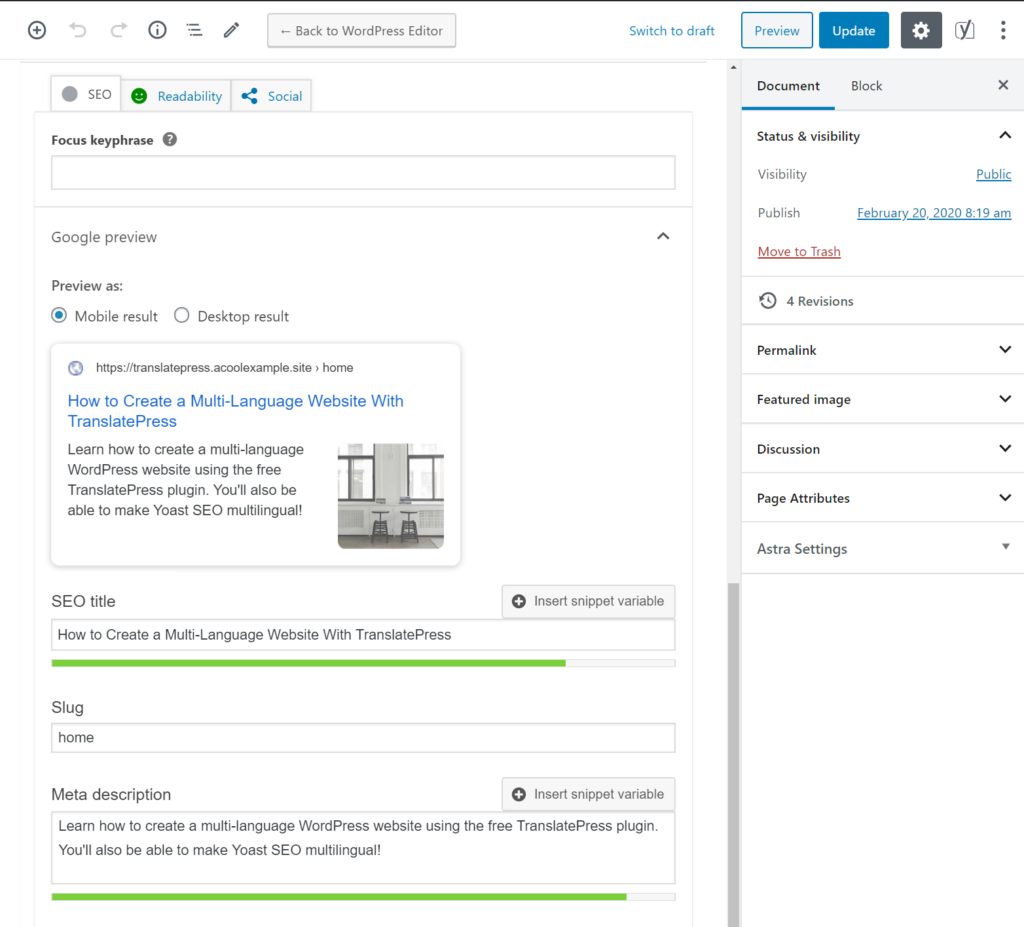 By default, Yoast SEO will use the SEO title and meta description to control how your content looks when someone shares it on Facebook or Twitter.

If you want to manually edit your Facebook and Twitter information, you can go to the Social tab of the Yoast SEO meta box: 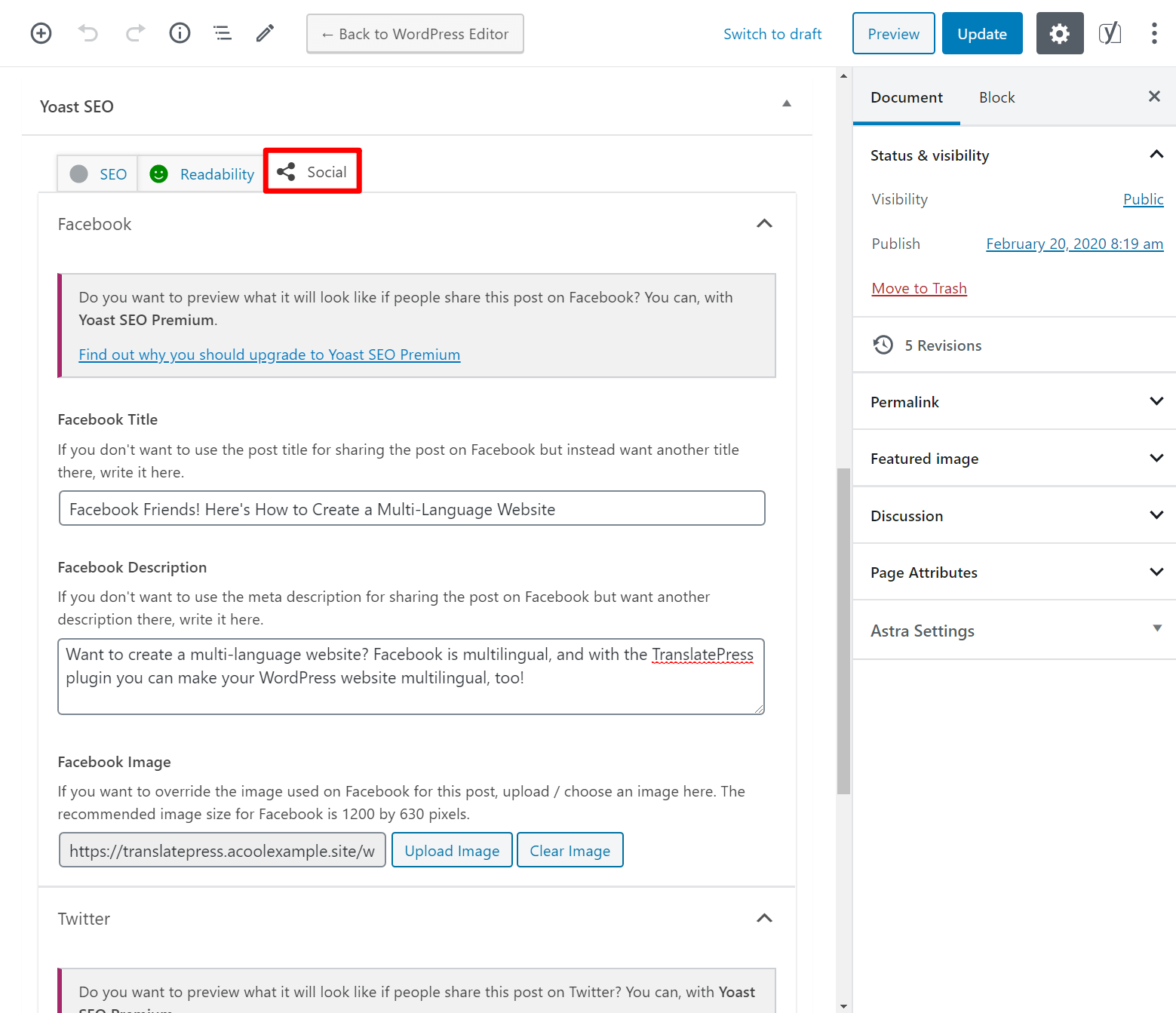 You’ll be able to translate all of this information in the next steps.

Once you’ve set up Yoast SEO, it’s time to make everything multilingual.

If you haven’t already translated your site with TranslatePress, you’ll need to install the core TranslatePress plugin, as well as the premium SEO Pack add-on.

Once you’ve activated both the plugin and the add-on, go to Settings → TranslatePress to choose the languages that you want to use on your site.

For example, here’s what the setup would look like if you want to offer Yoast SEO metadata (and the rest of your site’s content) in both English and Spanish: 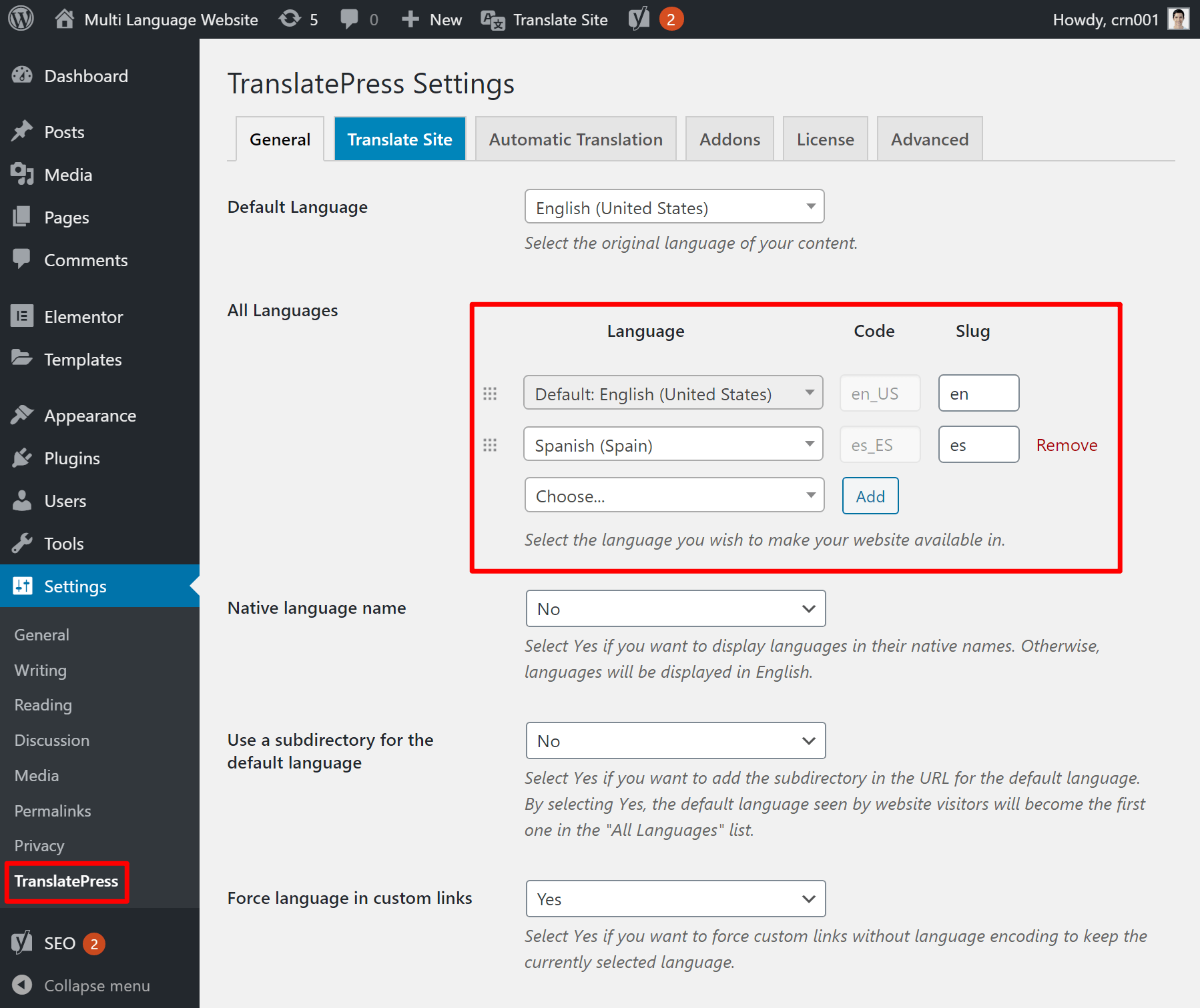 If you want, you can also enable automatic translation, which will let you use machine translation from Google Translate or DeepL to translate your Yoast SEO content (and the rest of your site).

Even if you use automatic translation, you’ll still be able to manually edit all of your site’s translations.

If you want to set up automatic translation, you can do that from the Automatic Translation tab: 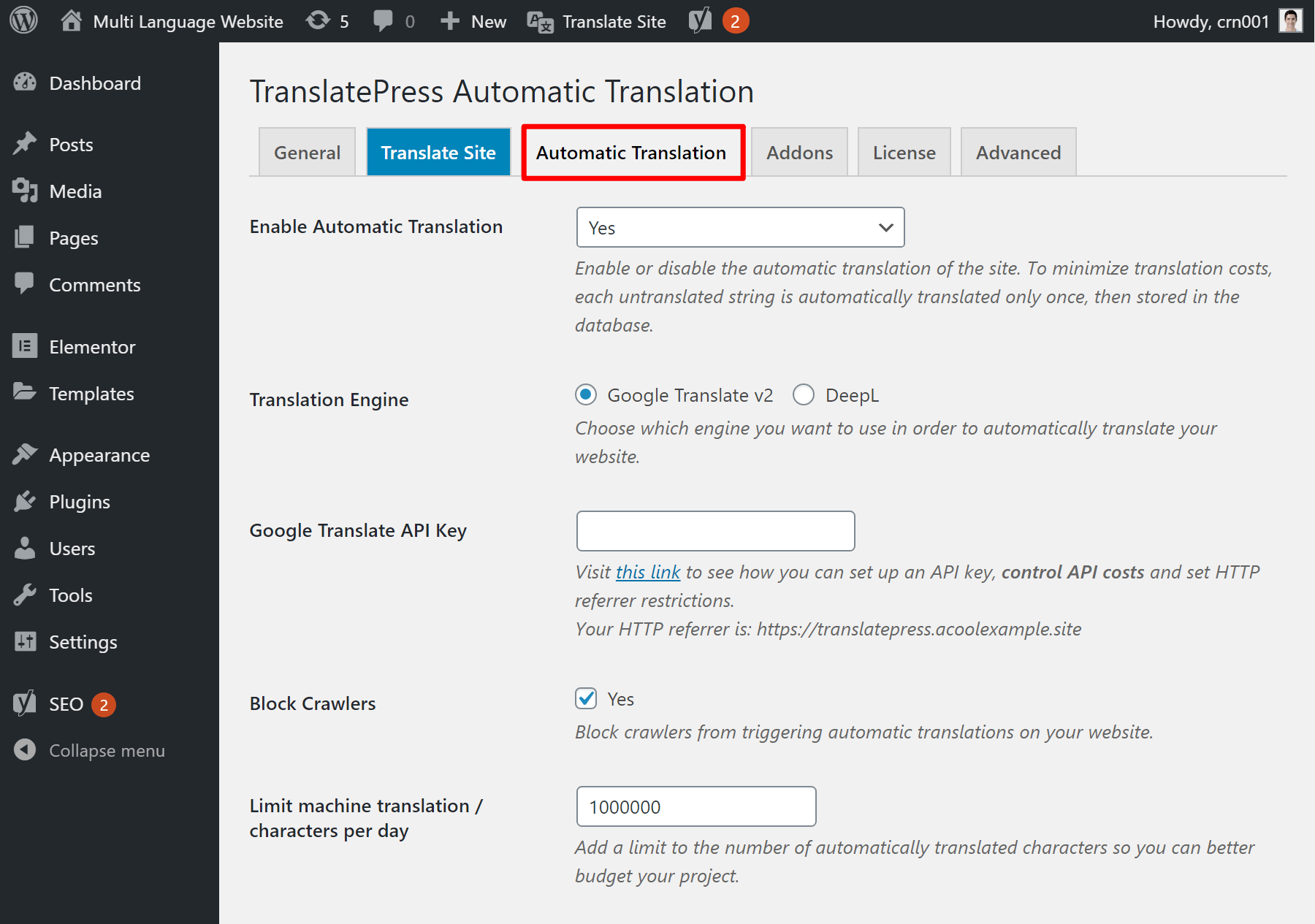 Now, you’re ready to start translating your Yoast SEO content as well as every text that appears on your site.

To begin, go to the front-end of your site and open the page that you want to translate. Then, click on the Translate Page button on the WordPress toolbar to open the visual TranslatePress editor: 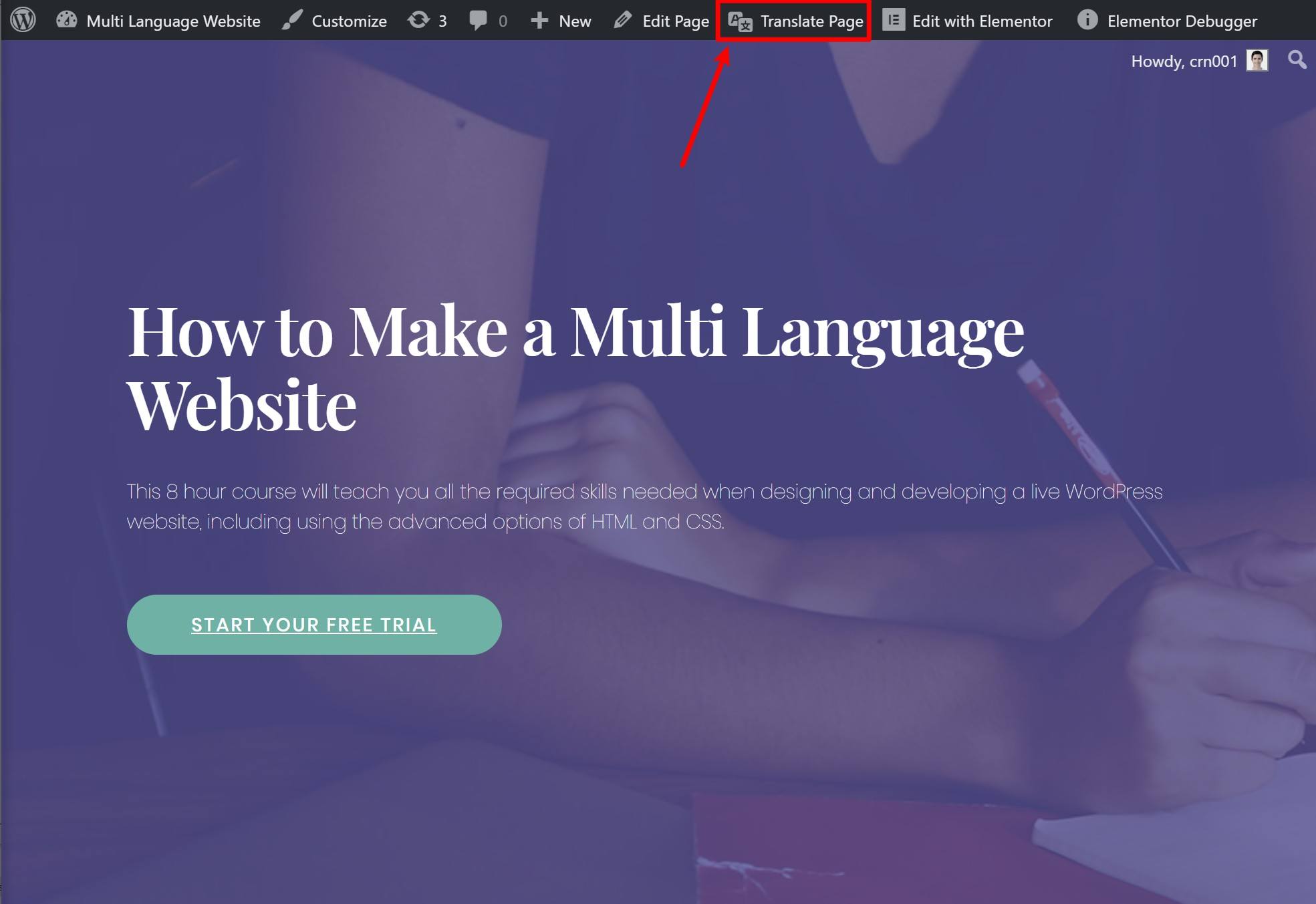 Now, you should see something that looks a lot like the native WordPress Customizer. You’ll see a live preview of your site on the right and a sidebar on the left where you can manage your translations.

If you want to translate regular content on your site, all you have to do is hover over it and click the pencil icon. Then, you’ll be able to edit its translation in the sidebar:

Of course, Yoast SEO details aren’t visible on the front-end, so you won’t be able to hover over them. Instead, you can use the “Select string to translate…” drop-down in the sidebar. Here’s how it works to add your Yoast SEO multilingual translations…

To access your SEO title and meta description, open the drop-down and look for the Meta Information section, which should be near the top of the drop-down options.

There, you’ll see two entries for:

The original native language content for these two fields is pulled straight from Yoast SEO for this specific page.

To start translating, select the content that you want to translate: 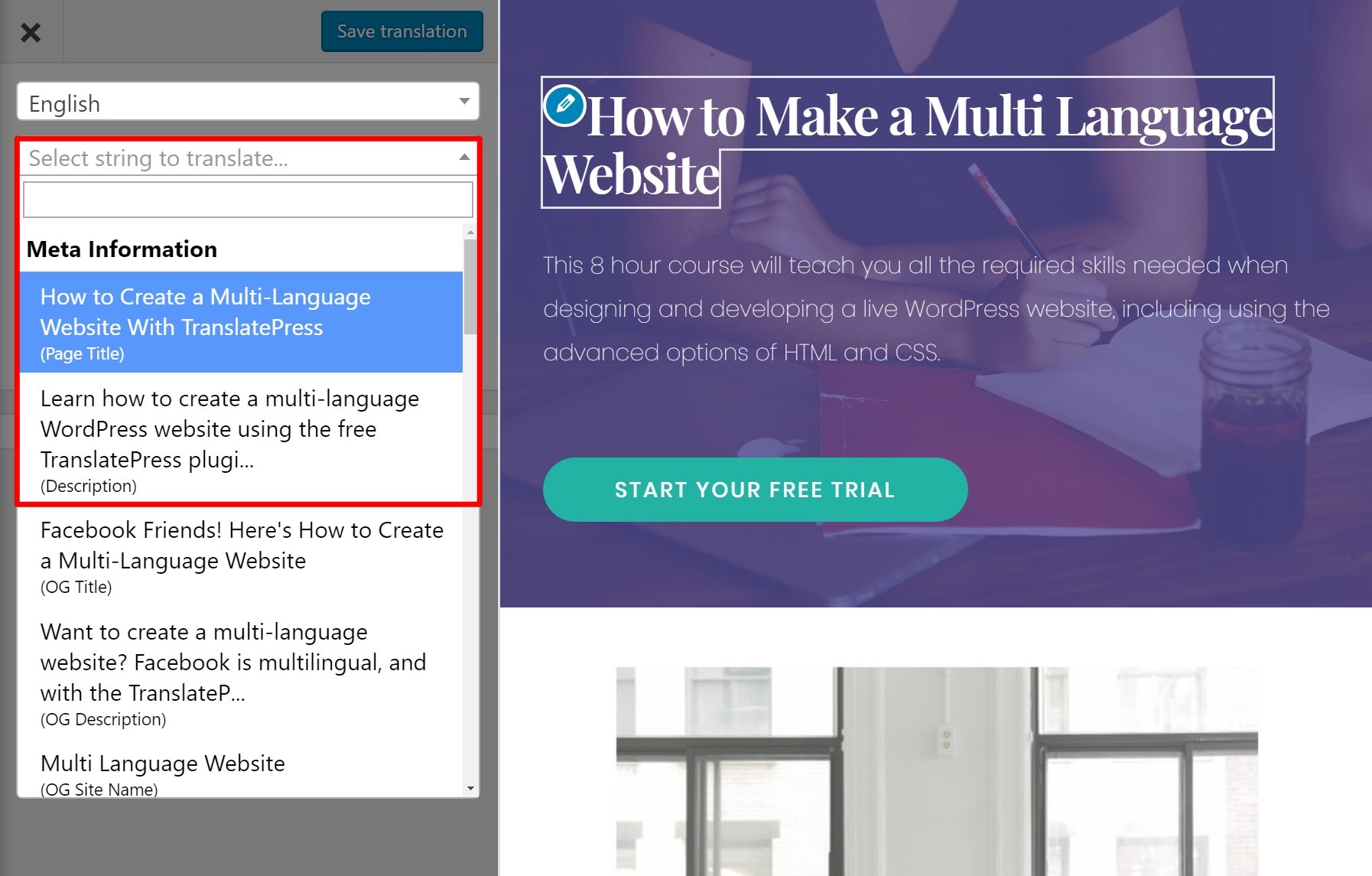 Then, you can edit the translation in the sidebar: 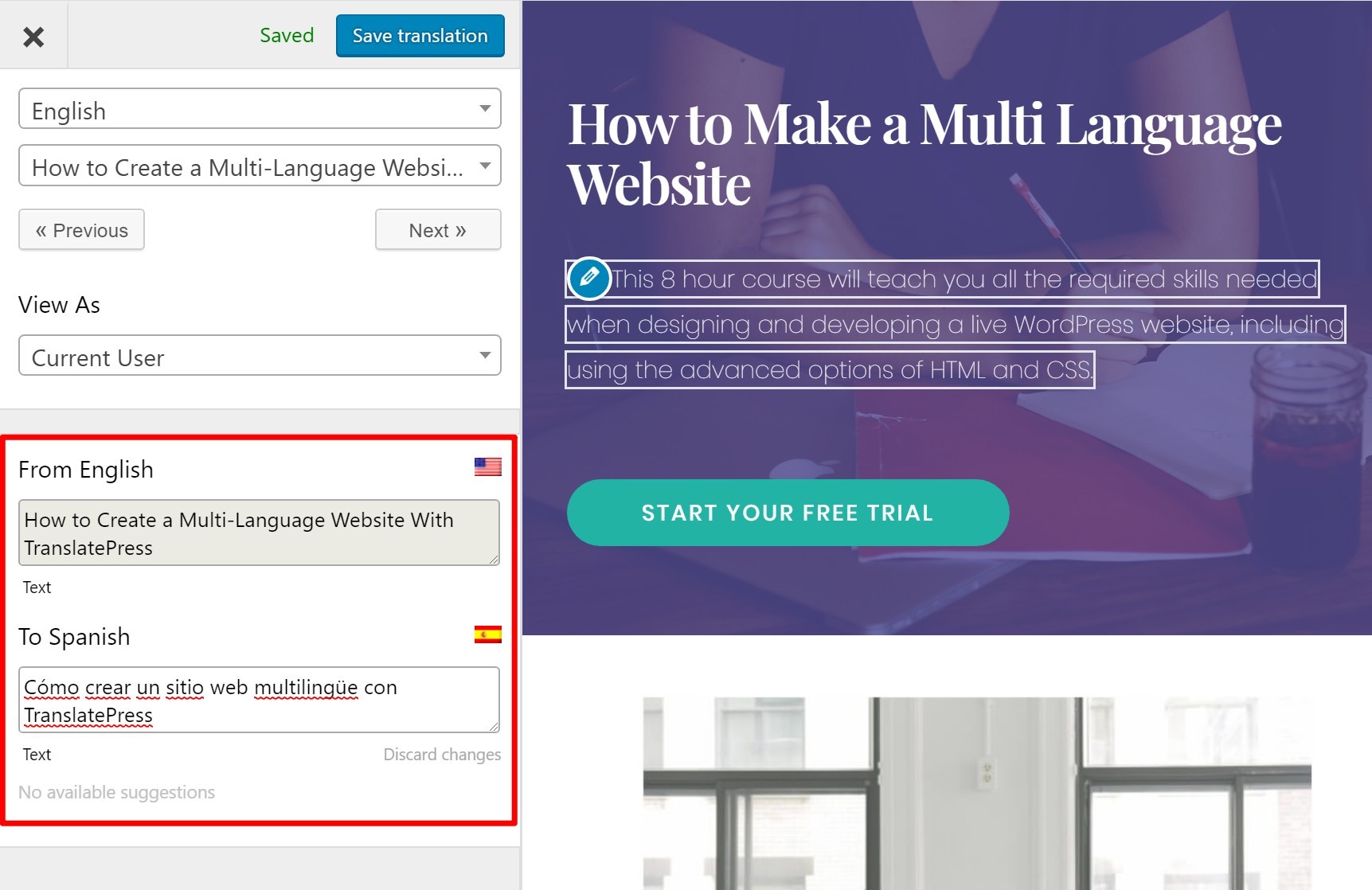 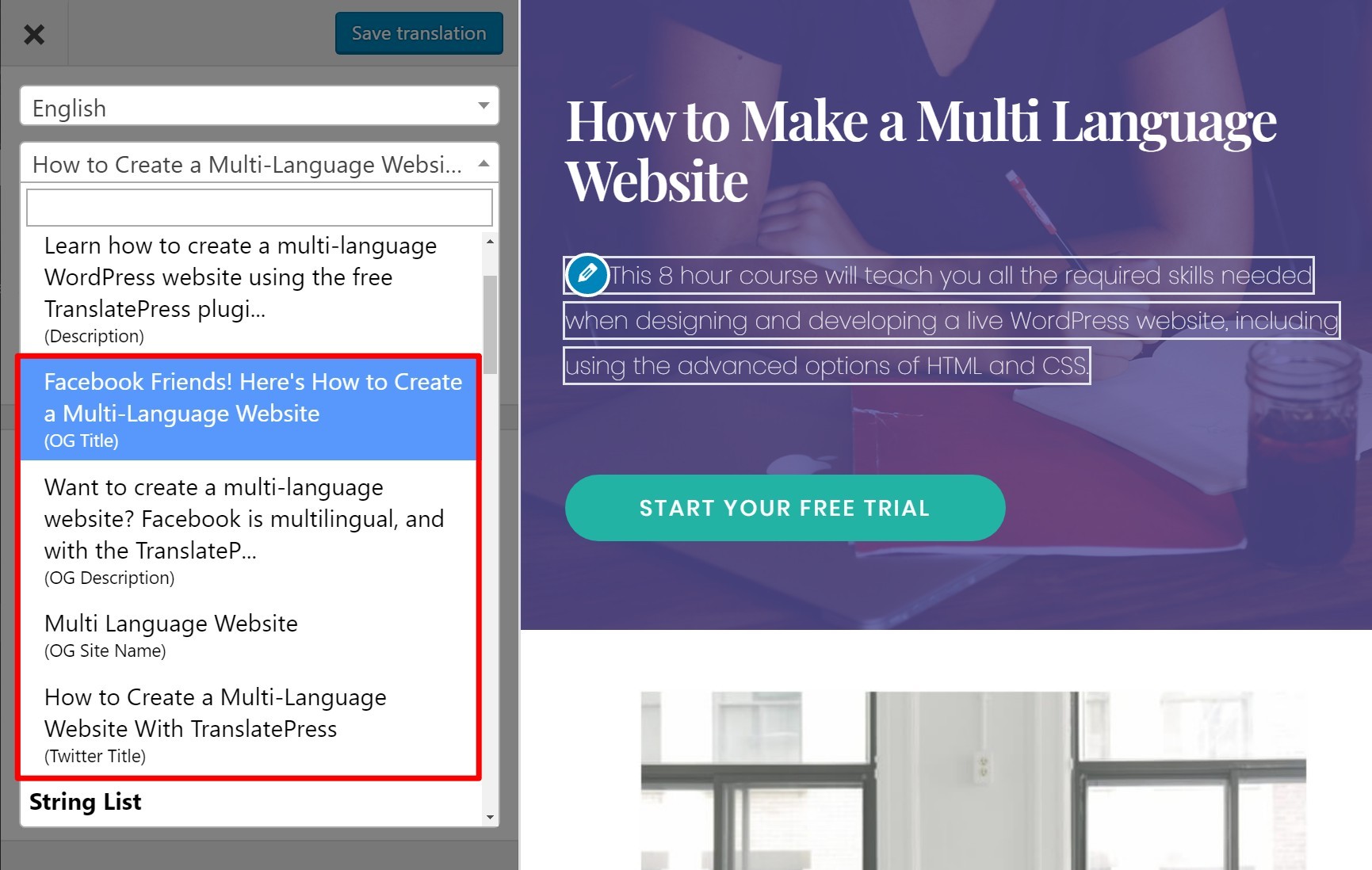 Again, this information is pulled directly from the Social tab in Yoast SEO.

Image alt tags aren’t technically a Yoast SEO feature, but they’re an important part of multilingual SEO so we think it’s worth covering them as well.

To translate image alt text, hover over the image that you want to work with and click the blue pencil icon. Then, you can edit the alt text in the sidebar. You’ll also be able to change the image file itself based on a visitor’s language.

Your URL slug is another element that doesn’t come directly from Yoast SEO, but will still play an important role in how optimized your site is for multilingual SEO.

To translate a piece of content’s URL slug, use the drop-down to select the Post Slug from the Slugs section: 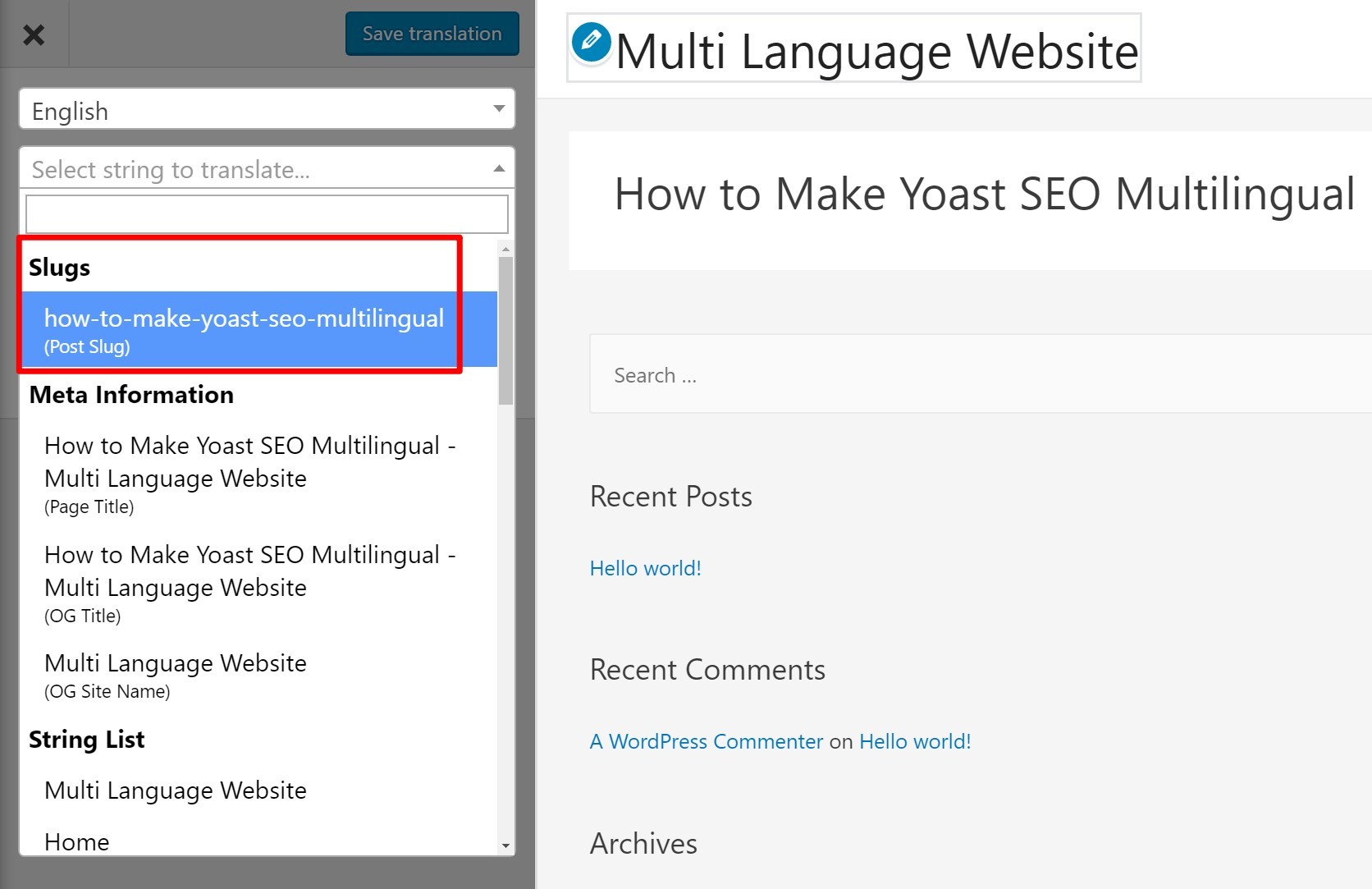 Then, you can edit your URL slug in the sidebar.

To show you how Yoast SEO is now multilingual, we need to take a peek at the code, which is where Yoast SEO controls your SEO details and social media descriptions.

When you view the English-language version of the page, here’s how Yoast SEO’s content looks in the source code: 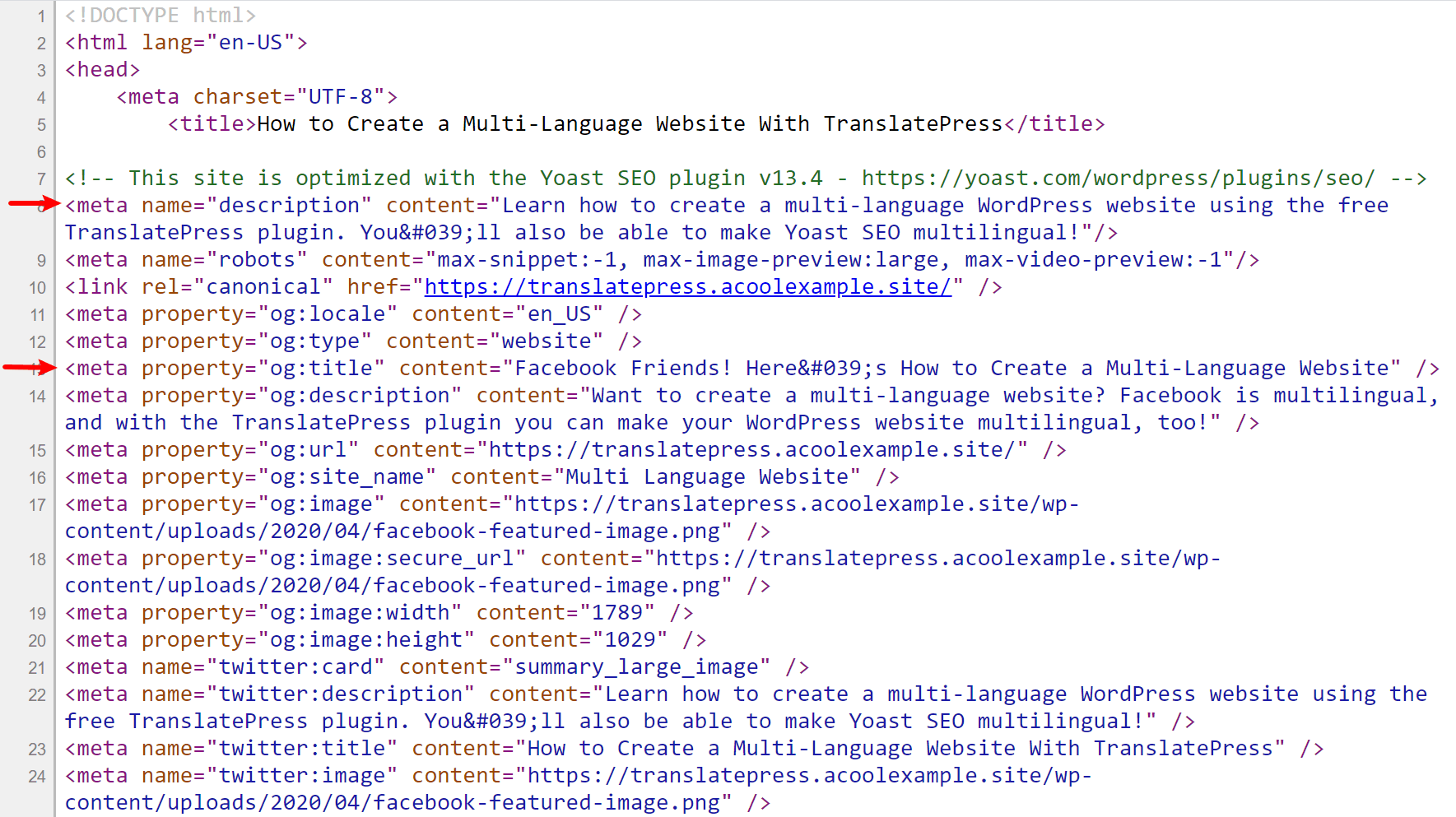 And when you switch to the Spanish-language version, you can see how Yoast SEO serves up the translated content instead: 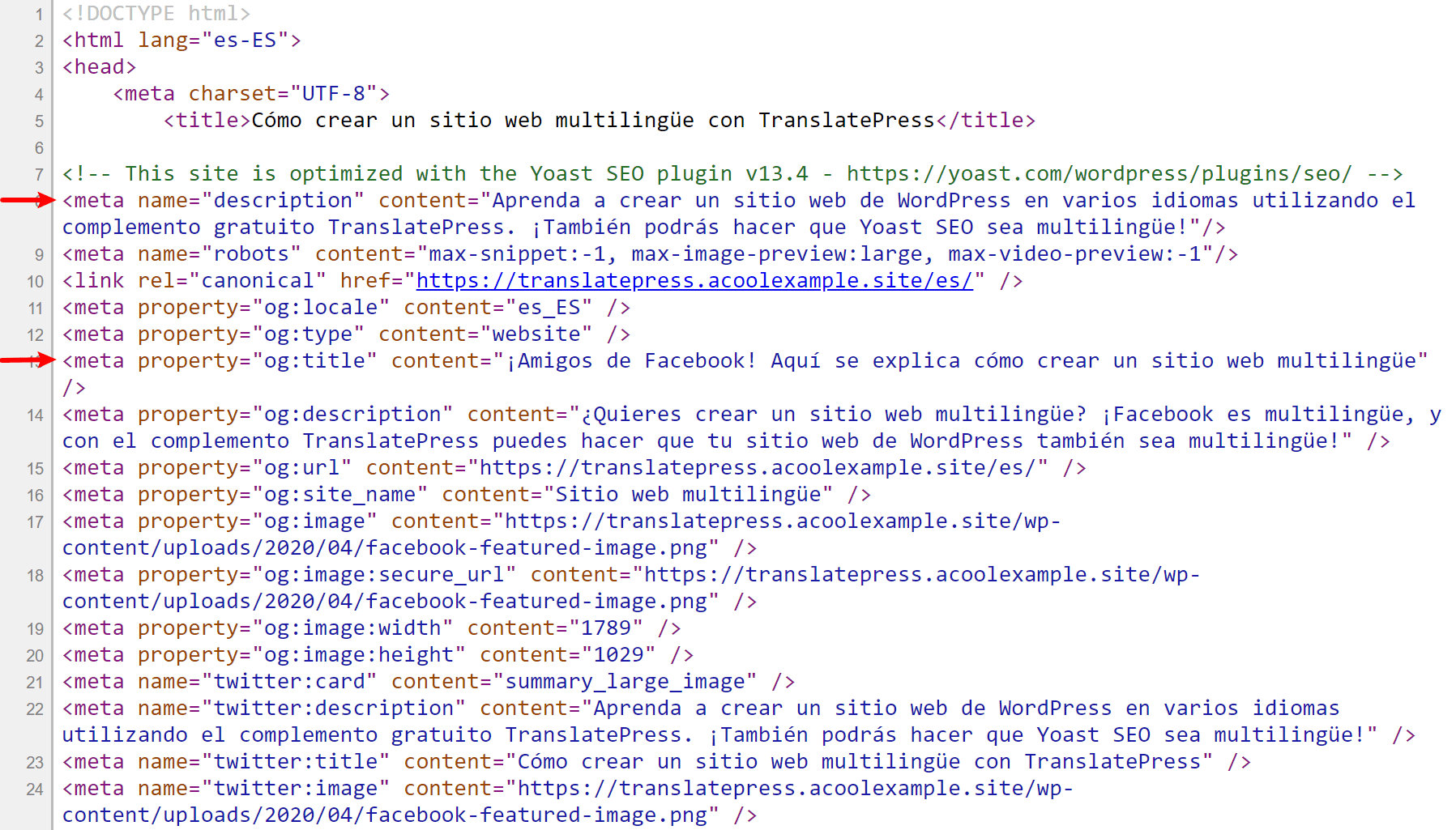 And voila! You just made Yoast SEO multilingual.

In addition to translating the metadata for individual pieces of content, TranslatePress and the SEO Pack Add-on can also help you turn your monolingual Yoast SEO sitemap into a multilingual XML sitemap.

A multilingual sitemap is just like a regular sitemap, but it also divides your site up by language.

With a multilingual sitemap, you can help Google and other search engines fully discover your site in every language that you offer, rather than just your native language.

TranslatePress has a built-in integration with Yoast SEO (as well as other popular SEO plugins). You don’t need to perform any manual action—your multilingual sitemap will start working right away.

If you open your sitemap (yoursite.com/sitemap.xml), you’ll see that TranslatePress automatically includes all of your multilingual content in your Yoast SEO sitemap: 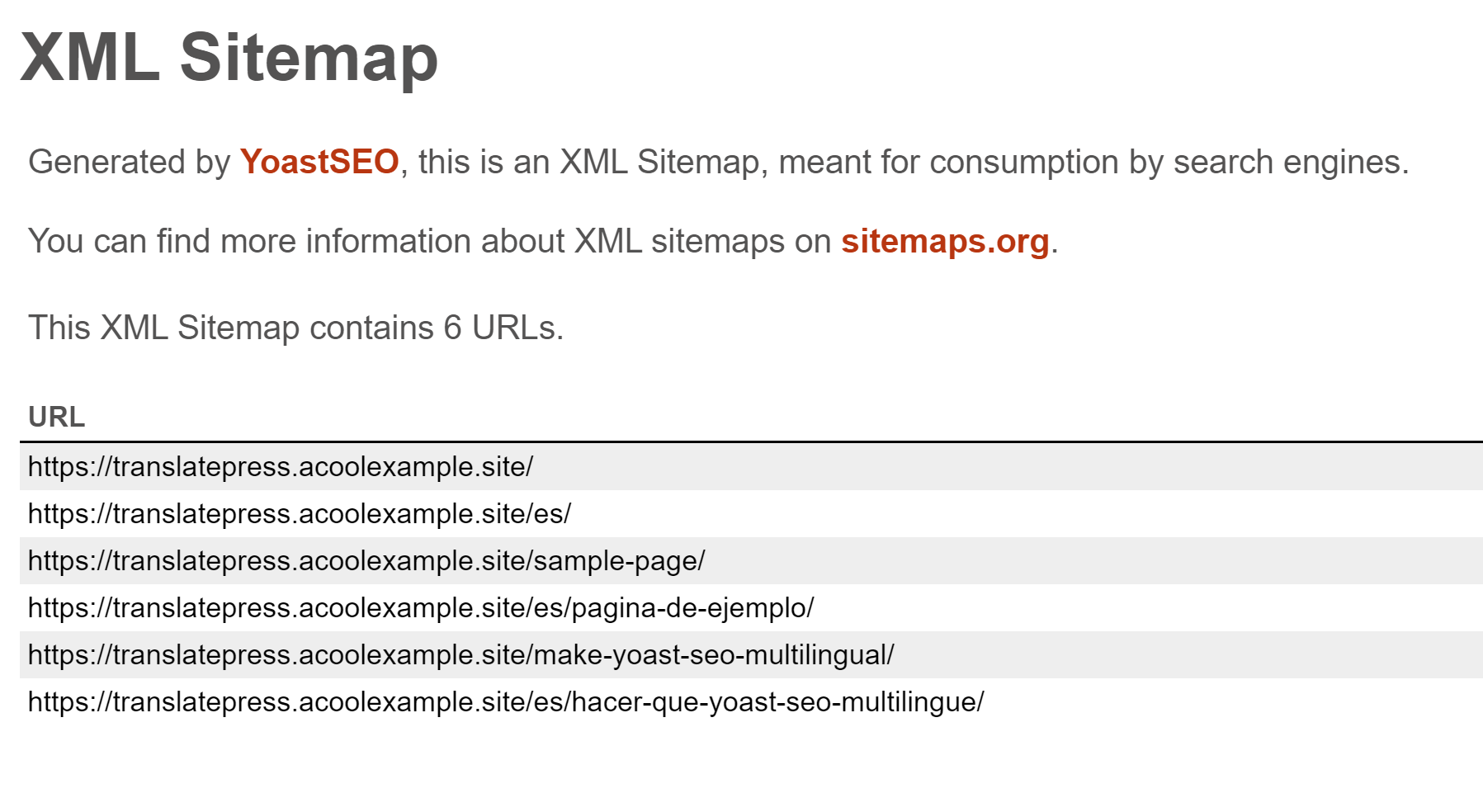 Yoast SEO is one of the best tools to help you optimize your WordPress site for search engines. However, it only works in your site’s native language.

If you want to make Yoast SEO work for any multilingual WordPress site, you can pair it with TranslatePress and its SEO Pack add-on.

You’ll be able to translate all of your Yoast SEO content into unlimited new languages using the intuitive visual interface that you saw above. Translating your SEO metadata will make sure your translated content will rank in multiple languages.

You can also use machine translation from Google Translate or DeepL to automatically translate all of your Yoast SEO metadata, even down to your URL slugs and image alt text.

Do you still have questions on how to turn Yoast SEO multilingual? Let us know in the comments!