Searching for a WooCommerce currency converter plugin so that you can display your store’s prices in multiple currencies?

If you’ve created a multilingual WooCommerce store with TranslatePress, a WooCommerce currency converter plugin is a great way to add some extra localization to your store by translating both the content and the currency.

Or, even if your store’s content only exists in a single language, you still might have situations where you want to offer your store’s prices in multiple currencies.

Localizing your prices in a visitor’s currency makes it easier for shoppers to make decisions, which is always a good thing when you’re trying to optimize your conversion rates.

WooCommerce doesn’t include any built-in features to add a currency converter, but you can easily add this functionality with a plugin.

In this post, we’ve rounded up our picks for the six best WooCommerce currency converter plugins, including both free and paid options.

Some of these plugins help you fully convert your currencies, even going as far as letting shoppers actually pay in their preferred currency. Some other plugins are more lightweight and just let shoppers convert prices for convenience, even though the payments are still handled in your store’s default currency.

You can pick the approach that works best for you – let’s dig in!

These plugins are listed in no particular order – we encourage you to read through the full list to find an option that matches your budget and feature needs. 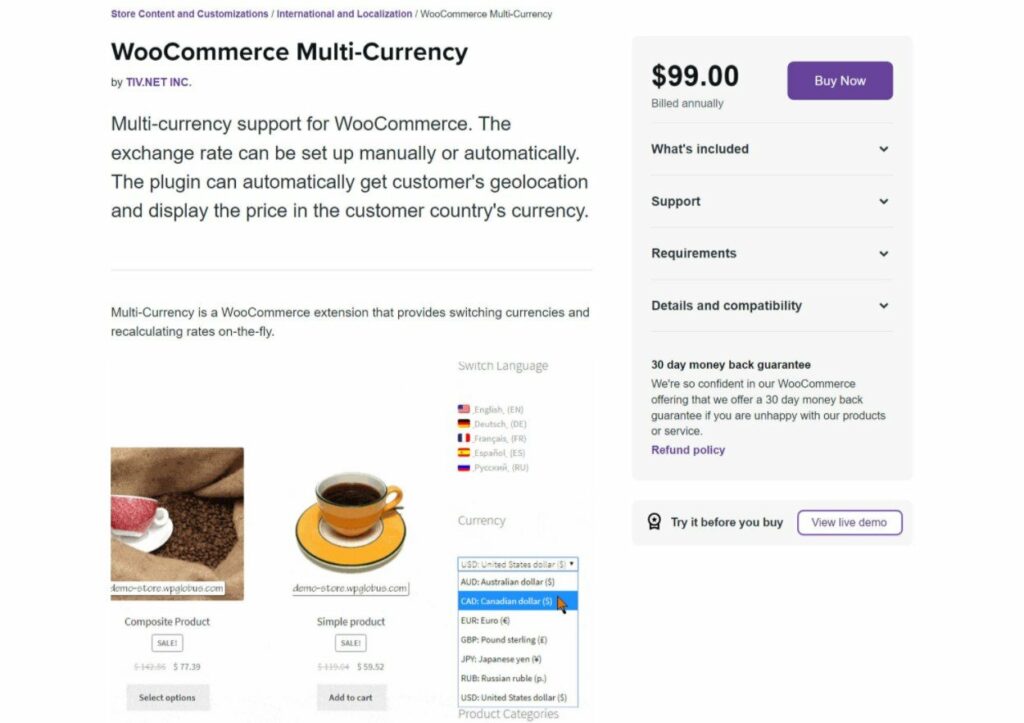 WooCommerce Multi-Currency is the currency converter plugin that we usually recommend to people who are using TranslatePress to create a multilingual WooCommerce store.

If you combine this with TranslatePress’s feature to automatically redirect visitors to their preferred language, you can present a fully localized shopping experience as soon as a person lands on your store.

As for currency conversion rates, you get two options:

You also have the option to set up automatic price rounding so that you can still have “pretty prices” after the conversion rather than weird-looking prices like €24.31.

Customers will also be able to actually pay in their selected currency, which isn’t always the case with currency converter plugins.

Booster for WooCommerce is unique on this list because it’s not just a WooCommerce currency converter plugin.

Instead, it’s an all-in-one toolkit for WooCommerce that adds over 110 different features and tweaks to your store.

The important thing, though, is that all of these features are 100% modular, so you can pick and choose exactly which features to use and avoid bloating your store with unnecessary features.

In a way, it’s kind of like the Jetpack plugin, but focused on WooCommerce. In fact, it used to be called WooCommerce Jetpack before switching the name due to trademark issues.

For the purposes of this post, you’ll be most interested in Booster for WooCommerce’s “Prices and Currencies” modules.

With these, you can:

You also get some other useful features that you won’t find in many other plugins:

If you want to see Booster for WooCommerce in action, we used this plugin in our guide on how to create a multi-currency WooCommerce store.

Pricing: There is a free version at WordPress.org, but you’ll likely want the premium version for WooCommerce currency conversion. Most currency-focused features are available in the $199 Pro license, but a few require the $349 Elite license (most notably, the option to show different payment gateways based on the selected currency).

Because of this pricing, you’ll get the most value if your store is also able to benefit from some of the other 110+ modules in Booster for WooCommerce that aren’t focused on currency conversion.

By the numbers, WOOCS, short for WooCommerce Currency Switcher, is the most popular currency switcher plugin at WordPress.org.

The free version is active on over 60,000 stores according to WordPress.org and the premium version has been purchased over 10,000 times according to CodeCanyon.

As the name suggests, you can choose to offer any number of currencies on your store and let shoppers choose their preferred currencies using a frontend widget with three different formats:

You can place your currency switcher anywhere on your WooCommerce store using a widget or shortcode. Additionally, you can even synchronize the currency converter with your pre-existing language switcher in order to automatically change the currency when a new language is selected, using a pretty simple PHP function.

To control currency rates, you can connect to seven different currency aggregator services and automatically update rates on your own custom schedule – anywhere from every five minutes to once per month. Or, you can manually enter rates yourself.

To avoid ugly prices on automatic currency conversions, you can also round the prices up or down.

You also have the option to let shoppers pay in their selected currencies. Or, you can turn this off to have all shoppers pay in your default currency. If you disable in-currency payments, you’re essentially just displaying the converted prices as a reference for shoppers.

If you allow payments, you can also show different payment gateways depending on the currency that a user has chosen.

Other notable features include the following:

The free version of the plugin includes all of the features but only lets you add one new currency to your store. For unlimited currency support, you’ll need the premium version.

Pricing: Free version at WordPress.org. Pro version costs $34 for use on a single site with lifetime updates and six months of support (standard Envato licensing).

Currency Converter Widget is an official currency converter plugin that comes straight from the WooCommerce team.

This plugin offers a really simple way to add unlimited currency conversions to your store, but it also has some notable limitations, so you’ll want to make sure its functionality matches what you’re looking for.

Essentially, this plugin lets you add currency conversion for your shoppers’ convenience. However, it does not change the currency at checkout – all payments will still be done in your store’s base currency.

For example, let’s say you let people convert from USD to Euro. If a shopper chooses Euro, all of your WooCommerce store’s visible prices will be converted into the equivalent Euro prices using the Open Source Exchange Rates API.

This makes it easy for shoppers to make purchasing decisions because they can frame all of the prices in their local currency.

However, if a shopper goes to purchase one of those items, they’ll still pay in the original USD price and their payment method will be billed in USD.

Depending on what type of currency conversion you want to implement, this could make the WooCommerce Currency Converter Widget plugin a great option or a bad option – it really depends on your needs.

5. Price Based on Country for WooCommerce

The creatively named Price Based on Country for WooCommerce plugin does exactly what the name suggests:

This means it goes a bit further than just converting currency because you can also change the price based on a user’s location. Or, if you don’t want that, you can stick to just using it as an automatic currency converter.

To control the prices for each product, you have two options:

Unlike the previous Currency Converter Widget plugin, this plugin will actually change the price in the checkout process so that you can accept payment in different currencies.

Other notable features in this plugin include the following:

Pricing: Free version at WordPress.org. Pro version from €39 for use on a single site.

CURCY, or Multi Currency for WooCommerce, lets your shoppers browse your store in their preferred currency and pay in that currency (if you enable that option).

This is another popular option – the free version at WordPress.org is active on over 20,000 sites and the premium version at CodeCanyon has over 8,000 sales with an impressive 4.94-star rating.

The plugin offers full WooCommerce currency conversion, including the pricing, shipping, coupon code, taxes, and so on.

To let people choose their preferred currencies, you can place a currency switcher using a widget or shortcode. There’s also a neat “currency bar” feature that shows a floating bar with all of your currencies, kind of like the floating language switcher that TranslatePress adds by default.

To calculate currency exchange rates, you get two options:

There’s also an option to add a currency exchange fee, which can be helpful if you have added costs associated with a certain currency.

Other notable features include the following:

The free version of this plugin only lets you use two currencies. If you want support for unlimited currencies and a few other premium features (like multilingual support to match a currency to a user’s language), you’ll need the Pro version.

Pricing: Free version at WordPress.org. Pro version costs $32 for use on a single site with lifetime updates and six months of support (standard Envato licensing).

Yes – the premium version has identical pricing/terms with WOOCS.

Which Is the Best WooCommerce Currency Converter Plugin?

The best plugin for your needs will depend on your specific situation. You’ll need to answer questions such as the following:

Obviously, the other important consideration is your budget.

If you only need to add one new currency to your store, you can consider a free currency converter plugin, with these two being your best options:

If you’re willing to pay, all of the options on this list make good options, but we usually recommend WooCommerce Multi-Currency to TranslatePress users.

Speaking of TranslatePress – using a currency converter is only one part of offering an improved, localized experience for shoppers.

That is, you’ll be able to rank your products in Google in different languages, which can boost your organic traffic and grow your sales.

Best of all, it’s a lot easier than you might think to translate your store, especially if you use machine translation from Google Translate or DeepL.

If you’re interested in learning more, check out these guides:

Or, if you want to jump right into translating your store, you can install the TranslatePress plugin today to get started.

The best plugin to create a multilingual and multi-currency WooCommerce store.

Do you still have questions about currency converter plugins for WooCommerce? Let us know in the comments section below!