From 0 to 4500$/month with a new WordPress multilingual plugin. Transparency Report #1 - TranslatePress
Skip to content

Key learnings from launching TranslatePress, a WordPress multilingual plugin that anyone can use

The WordPress plugin ecosystem is quickly becoming a very crowded space. It’s getting harder and harder to get noticed and build something people will use, even more so pay for.

Over the course of 12 months, TranslatePress grew to over 20K active installs on wp.org and closed last month with over 4500$ in revenue from its premium versions.

This article is meant to cover the lessons learned while launching a new WordPress multilingual plugin, as well as challenges faced along the way.

To give you a little context, before we switched completely to plugin development, we were a custom development agency, so we had to deal with translation plugins from day one. Our projects varied from simple presentation sites with a few pages to complex multilingual setups that needed ongoing development and maintenance.

We did not like the translation workflow of almost all of the existing multilingual solutions on the market (non-visual, out of context, found in multiple places).

While as developers we could make it work, there was always a lot of friction for the end client. This resulted in broken things when the client tried to modify translations, repeated emails and requests on how to change specific things which should have been straightforward (but weren’t), and so on.

There had to be a better way of dealing with WordPress in more languages.

So, we asked ourselves:

And this is how TranslatePress was born.

One year after its launch, I’m happy to say:

Nothing is perfect and while there have been a few reported glitches between TranslatePress and a certain theme or plugin in the past 12 months, our support team is always there to help you overcome them. If it turns out it’s something we can do to prevent and eliminate them, it’s going to be added to the core of our plugin.

While this doesn’t seem much and is by no means a positive ROI on all the time and work invested in developing and maintaining this plugin, I’m positive there’s a lot of room for growth and this is only the beginning. More on that later.

Key Takeaway: Aim to build something different and (or) better. Don’t settle for less.

Similar to all our plugins, TranslatePress was built on a freemium pricing model. This worked well for us in the past, so why change it?

The core of the plugin is free and allows you to translate all your WordPress sites into a second language without any limits (like the number of words, theme/plugin compatibility, etc.). It also integrates with Google Translate for automatic translation capability.

The premium versions come with Pro add-ons, like Multiple Languages for adding unlimited translation languages, SEO Pack for enhancing your ranking in each language, plus the newly added: Browse as User Role, Translator Accounts, Navigation Based on Language, or Automatic User Language Detection.

These have all been created due to constant requests by our free plugin users (we’re writing each one of them down).

I strongly believe that without a consistent user base, you cannot build a solid and robust product.

Also, a happy user of your free plugin is more likely to purchase a premium version than a visitor of your website. 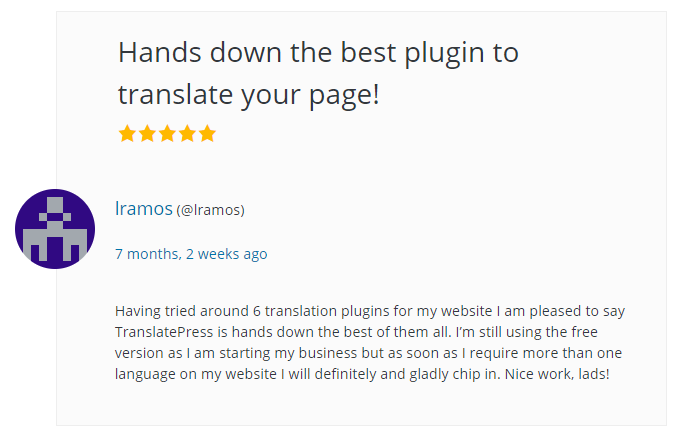 If you’re looking to build a reliable product that’s here for the long term, you need to price it accordingly.

For us, this meant being able to sustain its development, support, and marketing costs, while also bringing in profit in the medium/long term.

This translated into having subscription-based pricing, which is billed yearly, and auto renewed annually.

There were 3 premium versions, Personal (79€/year), Business (139€/year), and Developer (199€/year). The main difference is the number of sites you can use the plugin on, as well as which pro addons are included in a certain package.

Here’s a breakdown of the sales that came in last month:

Revenue-wise, August has been our best month to date and judging by the numbers we have until now, it looks like September will be better. August revenue was 3946 euros (a little over 4500$).

You can notice this monthly steady growth (nothing spectacular) for this year in the graphic below:

In the beginning, after launching the premium versions, we hardly had any sales. This wasn’t pleasant, but because we are in it for the long run, we didn’t despair. Also, the big majority of the sales that were coming in were for the Personal version, the one priced the lowest.

In the last couple of months, this changed. The number of sales increased and more and more people are purchasing the Developer and Business licenses, the ones that actually pack the most value. There are also more existing clients that upgrade from a Personal license to these two.

I think this happened because the plugin has matured. Seeing that it powers more than 20K websites, people are more confident to try it out and integrate it into their website, than when seeing it had only several hundred or a thousand active installs. Also, people that have been using it for a while realized it’s a good fit, want more out of it, and are happy to invest in a paid version.

Having so many options in the WordPress multilingual plugin space, it’s only normal that it takes a little time for people to find you and decide to use your product. It’s a sign of a maturing market.

Key Takeaway: If you’re planning to launch anything new and expect it to be successful, you need to be in it for the long run. Approach it like a marathon, not a sprint.

While I know we still have a long way to go, there are clear signs we’re heading in the right direction.

Development-wise our focus was always on keeping TranslatePress as simple as possible. We understand that that’s where its true power lies.

This is something we always keep in mind when adding new features or deciding if something should be part of the plugin core.

Our plugin development direction and new features are mainly influenced by user feedback. The more people use the plugin, the more accurate feedback we can act upon.

The main things currently on our development roadmap are:

This means offering our users the ability to send content to professional translators and receive the translated text back directly from the plugin UI.

A lot of ongoing development work goes into compatibility. We need to deliver on our promise that it works out of the box with any theme or plugin, so whenever we bump into weird glitches that need fixing we try to zoom out, get a wider perspective and try to find a more general fix. Not just one that will work for that particular theme or plugin.

Key takeaway: When adding new features always make sure you’re not sacrificing your plugin usability. Don’t give up the reason why they chose you in the first place for the hope of potentially attracting new users with this new amazing feature.

We’ve come a long way in the past 12 months. However, judging by how much we believe in this project and where we want to take it, this is still the beginning of the journey.

Here are our main short-term goals:

Long term, with the help of our users, we’re looking to make TranslatePress the best WordPress translation plugin on the market.

This sums up our first TranslatePress Transparency Report. I’m thinking of writing these reports on a regular basis.

If you get any value out of them or want me to address a specific topic in the next one, please let me know in the comments section below.

3 thoughts on “From 0 to 4500$/month with a new WordPress multilingual plugin. Transparency Report #1”