DeepL Translator Review: Is It Better Than Google Translate?
Skip to content

Searching for a DeepL translator review to decide if this is the best translation tool for your business?

If you value translation accuracy, DeepL is one of the best machine translation services that you’ll find, even beating out other popular services like Google Translate.

The main downsides are that it has very limited coverage outside of European languages and it can also be a little more expensive than other services depending on your needs.

I’m getting ahead of myself, though, because the purpose of our DeepL review is to help you understand where those conclusions come from so that you can choose the right translation service for your personal needs or for translating your website.

To help you do that, we’re going to cover the following information:

There’s a lot to cover so let’s dig in!

DeepL Review of Translation Options: What Options Do You Have for Translating Content?

Let’s go through them…

The DeepL web interface is the simplest way to start translating content with DeepL.

You can paste in text to translate it directly or you can upload a file (.pdf, .docx, or .pptx):

You’ll then see the complete translation on the right. If you click on a specific word in the translation, you can also see alternatives for just that word.

Overall, if you only need to infrequently translate text or documents, the web interface is all that you need.

For more serious translation, you can use DeepL’s apps for mobile and desktop.

For desktop, DeepL supports both Windows and macOS.

For mobile, DeepL supports both iOS and Android.

There are a few main advantages of using the app over the web interface: 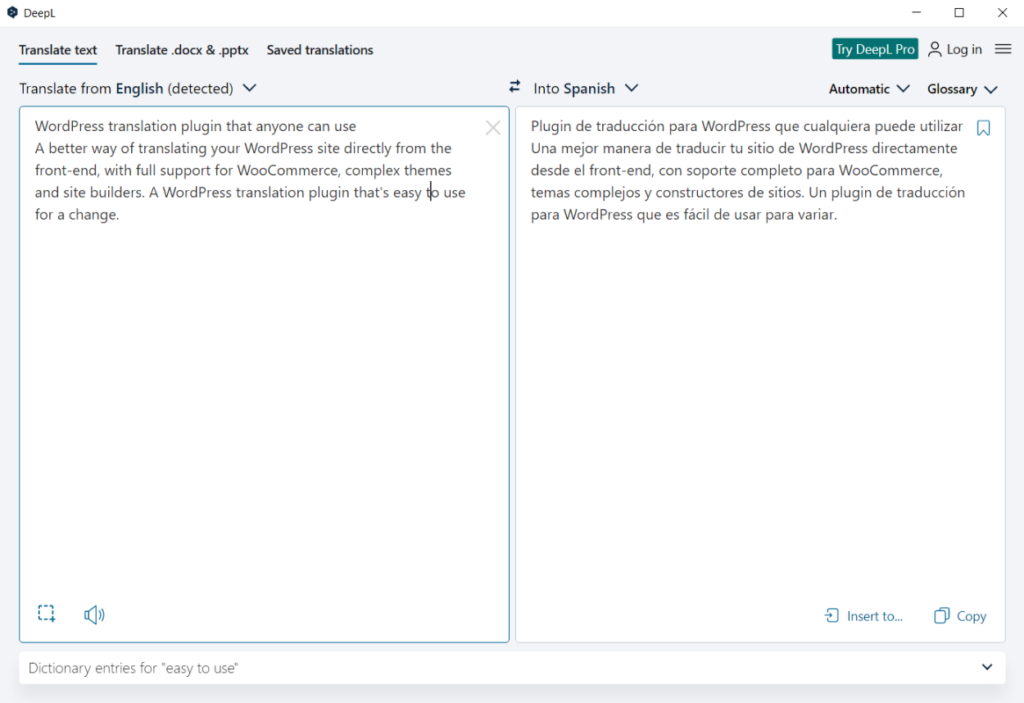 It’s not a massive difference vs the web app. But everything is just a bit more convenient and you also get some unique features like keyboard shortcuts.

If translation is part of your everyday workflow, you’ll definitely want to use the desktop apps.

The same principle holds true for the DeepL mobile apps, though the advantages are a bit different.

One big advantage of the mobile app is that you get real-time camera translations. You can use your camera to highlight some text and see the translations right away. Here’s a promo shot that showcases this feature:

The DeepL API gives you a programmatic way to translate content. Typically, you would use this to translate your own website or app’s content to create a multilingual experience for visitors.

While “programmatic translation” sounds complicated, it doesn’t have to be.

If you use a tool that integrates with the DeepL API, you can benefit from it without needing any special technical knowledge.

For example, if you have a WordPress website, the TranslatePress plugin lets you easily use the DeepL API to translate your content and create a multilingual WordPress website. Most importantly, you do not need any technical knowledge to accomplish this.

If you are a developer, however, you can also build your own custom implementations by following the DeepL API documentation. For example, you could build automatic translation into your customer support system.

Translation accuracy is tough for me to personally assess because DeepL doesn’t support the other language that I speak some of (Vietnamese – more on that next).

However, I can do three things to help you gauge DeepL’s translation accuracy:

This matches with data from a study that DeepL commissioned. DeepL shared finished translations from four services with a group of professional translation experts. Those services were:

In situations where the tools generated different translations and the professional translators rated one higher than the others, the highest-rated translation was far more likely to come from DeepL: 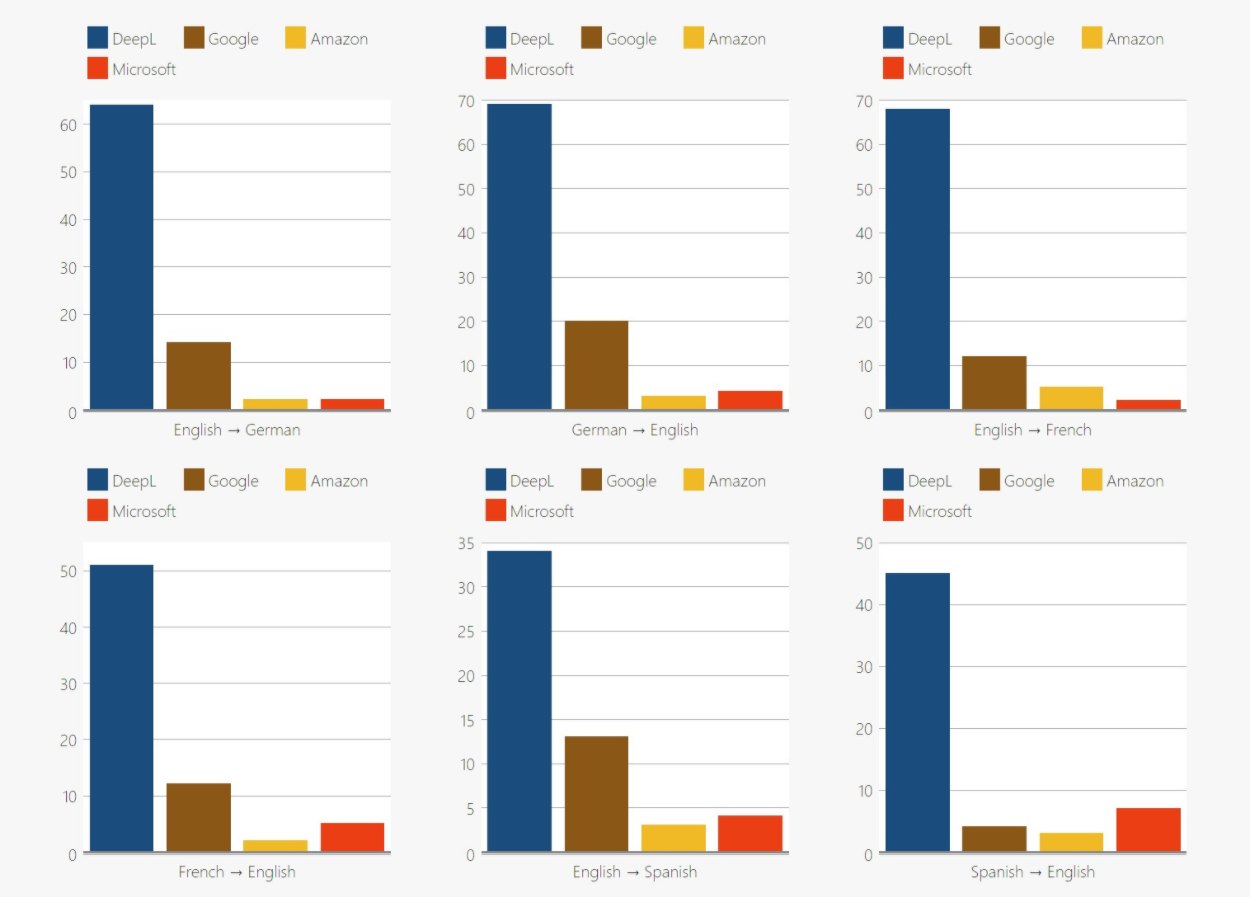 This data is a little tough to understand because it doesn’t represent all translations. There were certainly a number of translations that were equally good between all services. This data only says that for translations in which one translation was better than another, the winning service was DeepL most often.

Finally, Gigazine, a Japanese blog, ran its own tests on DeepL’s Japanese translations and also found DeepL to be more accurate than other services. The test results are in Japanese, but you can translate them using DeepL!

How Is DeepL Able to Achieve Such Accuracy?

Ok, so how are DeepL’s translations better than services from much larger companies like Google, Microsoft, and Amazon?

The answer mainly has to do with where DeepL’s translation training comes from.

DeepL actually started as part of Linguee before spinning off into a separate product.

Google Translate, on the other hand, used the Europarl Corpus as its original training tool. This is a database of officially translated documents that all came from European parliament meetings, which might explain why its translations don’t do quite as well at sounding naturally human.

The basic idea, though, is that DeepL was able to draw on a unique pool of naturally translated text, which has helped it achieve such good accuracy.

Compared to other automatic translation services such as Google Translate, DeepL has a fairly short list of supported languages.

DeepL focuses mostly on European languages, though it has expanded to also offer Chinese and Japanese.

If you exclusively plan to use European-origin language pairs, you should have no problems. If you need languages from other places in the world, you might run into issues.

Here are all of the languages that DeepL currently supports:

However, there are still some popular languages that are missing, most notably Arabic and Hindi. DeepL is also missing a lot of smaller-but-still-popular languages in Asia, such as Bahasa Indonesian, Korean, Vietnamese, and Thai.

For example, if your business needs to translate a lot of documents, you would use the plans for individuals and teams.

On the other hand, if you want to use DeepL to automatically translate your WordPress website, you would need the DeepL API plan (which is labeled “for developers”, even though you don’t necessarily need to be a developer to use it).

To start, there’s a free plan that lets you translate via both the web and app interfaces.

However, the free plan has some limits:

To raise those limits, there are three paid plans. You can either pay monthly (prices below) or pay annually for a 33% discount: 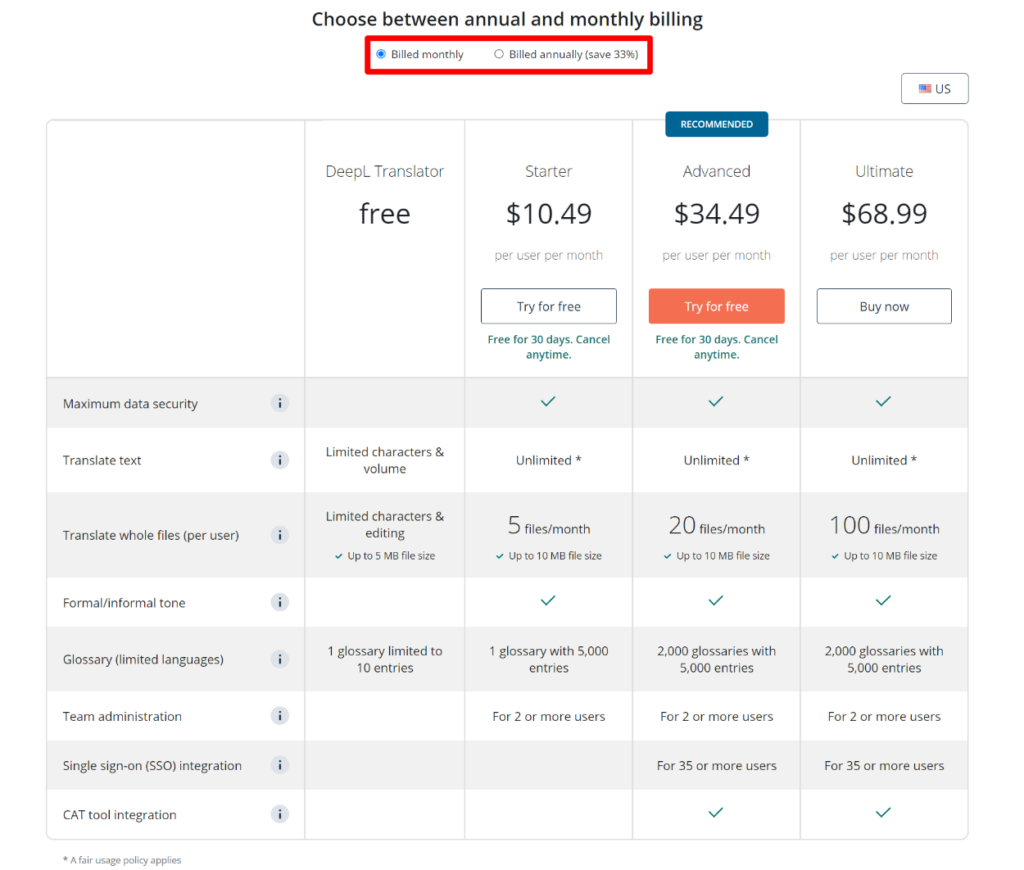 If you need to access the DeepL API to translate your app or website, there’s a forever free plan and then a single pay-as-you-go premium plan.

The DeepL API free plan lets you translate up to 500,000 characters per month. That’s equal to around 100,000 words, though it depends on your exact content.

If you need to exceed those limits, you’ll pay a flat $5.49 per month plus $25 per one million characters that you translate.

Here’s the total monthly cost to translate a certain number of characters per month:

This is a bit more expensive than most other translation services. For example, here are the rates per one million characters for other popular tools:

However, DeepL also performed better than all of those services when it comes to translation quality.

Basically, the question you need to ask yourself is this:

Am I willing to pay a bit more for higher-quality translations?

You’ll also want to think about your translation volumes. If you’re only translating two million characters per month, the pricing difference might not be a big deal because it’s only ~$15-$30.

But if you’re translating two hundred million characters per month, you’d be talking about a ~$1,500-$3,000 difference, which is a different ballgame.

I already touched on some of the differences between DeepL vs Google Translate and other translation services above, but let’s go into a little more depth here.

First off, DeepL supports fewer languages than Google Translate and most other services. However, this won’t be an issue if you’re focused on European languages and/or Chinese and Japanese.

As long as DeepL supports your language, the main differences are this:

If you want to see a deeper discussion here, check out our full DeepL vs Google Translate comparison.

We also have a post on Google Translate alternatives that shares some other machine translation services worth considering.

If you’ve built a website using WordPress and you’re considering using DeepL to translate your website, TranslatePress offers an easy, non-technical way to use the DeepL API on WordPress.

When you connect to the DeepL API, TranslatePress will automatically translate all of your site’s content into one or more new languages using DeepL.

Other notable features in TranslatePress include the following:

DeepL Review Final Thoughts: Should You Use It?

If you want the most accurate translations possible, DeepL is definitely one of the best options. When it comes to translation accuracy, DeepL is regularly rated as the best, even beating out Google Translate.

The main downsides of DeepL are:

If DeepL supports the languages that you need and you’re willing to pay a little extra for improved accuracy, then DeepL is definitely a great option.

On the other hand, if DeepL doesn’t support all the languages that you need, you might want to stick with Google Translate, which supports over 100+ languages.

If you’re using WordPress, you can also use TranslatePress to translate WordPress using Google Translate.

Do you still have any questions about DeepL or our DeepL translator review? Let us know in the comments!