Translating Entire Paragraphs at Once - TranslatePress
Skip to content

In this article, I’m going to illustrate how to translate a large piece of text together using TranslatePress. To understand why you would want to do that, let’s start with an example.

Everything is going fine until you encounter the following paragraph:

Now, the word Blue is emphasized, making it a stand-alone string. The rest of the sentence is a separate string. 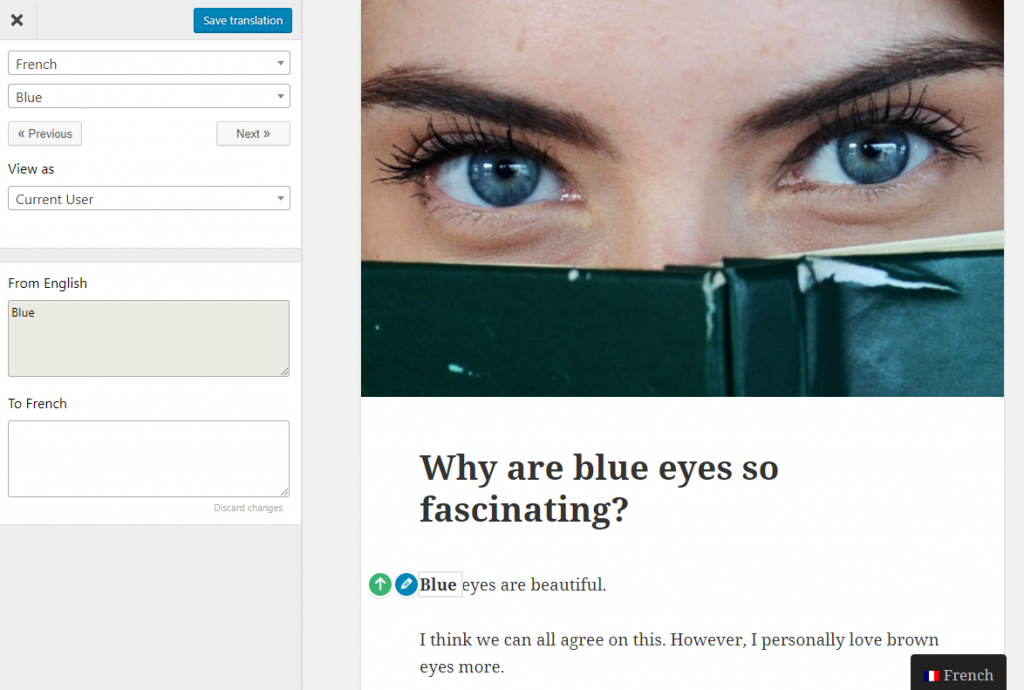 The problem is that the French translation has the noun “les yeux” (eyes) before the adjective “bleus” (blue). The translation looks like this:

Now the emphasized word has to be in the middle of the string because that’s where the word “bleus” is. The structure of this sentence is a bit different for the French language so it would be a lot easier to just translate the sentence all at once.

This is where our new feature called Translation Blocks comes in handy. You can simply click the Merge icon

Then you can just add the translation for the entire sentence while adding the emphasized word exactly where it’s supposed to be.

This new tool makes it easy to translate larger chunks of text at once, especially since languages can be very different in structure. Merging text together is very useful when the content contains links, underlined words, and other types of enrichment added to the text.

If you later decide to undo this merging operation in order to translate the little pieces individually, you can just click the Split button

. The translation of the entire block will be available at any time by merging it back.

Do you still have any questions about translating entire paragraphs or large pieces of text? Let us know in the comments below!